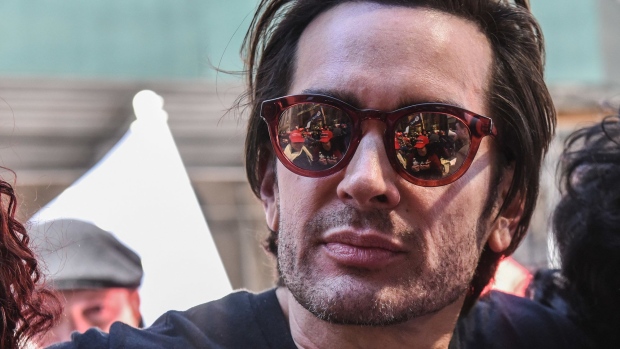 (Bloomberg) -- A pro-Trump social media influencer who was sentenced this week to three years of probation for his role in the Jan. 6 insurrection said a lawsuit filed against him and former President Donald Trump by injured Capitol Police officers fails to prove he was part of a conspiracy.

Brandon Straka, a self-described gay former liberal who dazzled conservatives with his #WalkAway campaign urging Democrats to ditch the party, said in a Friday court filing that his role in speaking at a right-wing rally a day before the riot isn’t evidence of involvement in a coordinated plan.

Straka, who’s seeking dismissal of the civil suit, pleaded guilty in a separate criminal case in October to disorderly conduct over what he called a “regrettable moment” during the attack. Straka had more than 660,000 Twitter followers and live-streamed his breach of the Capitol, at one point urging rioters to violently seize a police officer’s protective shield.

Straka denies being part of a conspiracy with the other defendants in the civil suit, including Trump, political operative Roger Stone and various members of right-wing militia groups including the Proud Boys. Straka also argues that his speech before the riot is protected by the First Amendment.

The police officers seek to “nullify the protection of his controversial political advocacy,” Straka’s lawyer said in the filing, adding that his client had “expeditiously and fully accepted responsibility” for his actions at the riot.

In a sentencing memorandum in the criminal case, prosecutors said Straka encouraged his followers “to prepare for a civil war” and then “celebrated the violence.” Straka cooperated during three meetings with federal agents, the U.S. said.

Straka also spoke at a November 2020 rally in Detroit, reportedly telling the crowd that “people are out of their f**king minds if they think that we’re going to sit down quietly and allow them to steal this election.” He pledged he would “do whatever needs to be done to make sure that Donald Trump is victorious as our President,” according to the suit.