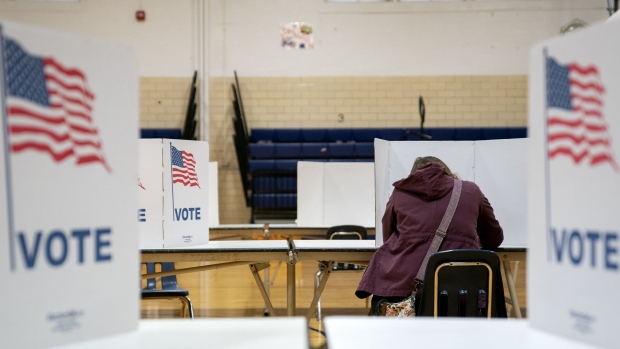 A voter fills out a ballot at a polling location in Falls Church, Virginia, U.S., on Tuesday, Nov. 2, 2021. Virginia's gubernatorial contest between Terry McAuliffe and Glenn Youngkin will offer the clearest picture yet of how much momentum Republicans have heading into 2022 elections that will decide control of Congress. Photographer: Stefani Reynolds/Bloomberg , Bloomberg

(Bloomberg) -- The Cook Political Report adjusted its ratings on nine governor races this morning, saying that eight of those shifts were in favor of the Republican Party.

The sole shift in favor of the Democrats made by the independent non-partisan newsletter was the New York governor’s race that went from ‘Likely Democratic’ to ‘Solidly Democratic.’

On Thursday, The Cook Political Report shifted the Massachusetts governor race from ‘Solid Republican’ to ‘Leans Democratic’ while also changing the Georgia governor race to ‘Toss Up’ from ‘Leans Republican.’