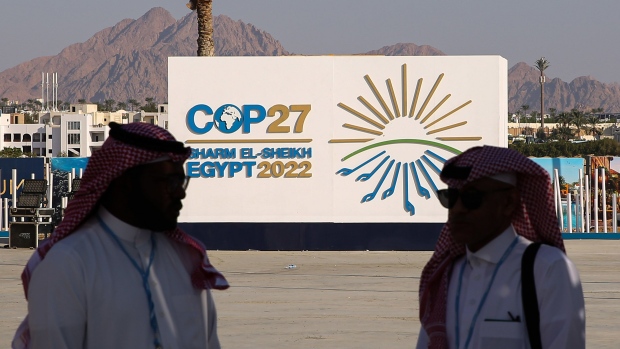 (Bloomberg) -- The president of COP27 is optimistic that a deal on loss and damage can be reached this week, despite disagreements over who should pay for destruction caused by climate change.

“I certainly will work to reach that landing zone” in a way that’s satisfactory, Egyptian Foreign Affairs Minister Sameh Shoukry, the president of the conference, said in an interview with Bloomberg TV.

The issue of loss and damage, how developed nations should compensate developing countries for climate change-fueled disasters they had little role in causing, is on the agenda for the first time -- but the details of exactly who should contribute and how much they offer need to be thrashed out. Richer countries, already falling short on previous commitments to the developing world, are wary about exposing themselves to open-ended liabilities.

A draft text released on Monday evening gave the conference two possible options. The first, likely to be harder for the industrialized world to accept, would commit to establishing a loss and damage fund by late 2024. The second proposes two years of technical work on whether the issue should ultimately be addressed through a “mosaic” of funding arrangements.

“There is a vast global community within the parties that places great importance on loss and damage,” said Shoukry, a four-decade veteran of Egypt’s diplomatic corps.

Island states and other countries exposed to the most extreme impacts of climate change are adamant that a large loss and damage facility is needed and some are calling for more recent major carbon emitters, like China and India, to pay into it.

“All the big emitters of greenhouse gas emissions should contribute to this endeavor,” the environment minister of Mauritius, Kavydass Ramano, said in an interview on Monday. “I don’t make any difference between industrial and also emerging countries, the fact that you have been contributing to increased temperatures.”

Ramano said that rather than being seen as an issue of liability, the route to consensus on loss and damage was to view the issue through an humanitarian lens, making funds available to deal with the aftermath of climate-related disasters.

Not all African nations are taking this position. Seth Osafo, legal adviser to the African Group of Negotiators, said developing nations will seek only a “voluntary contribution” from those countries whose economies are growing. In a press conference at the talks on Tuesday, Osafo said his group wants to see a funding facility to help those who are adversely affected by climate change, but specifically avoided a call for reparations. “The whole question of reparations is out,” he said.

Least developed nations and island states, however, say at bare minimum they need an an agreement to establish a loss and damage facility by the end of COP27. Molwyn Joseph, the outgoing chair of Alliance of Small Island States, said it’s a “red line,” adding the AOSIS group is discussing whether it will walk away from the summit without a deal if such an agreement is not made. A decision could be reached at a meeting of the alliance on Wednesday, he said.

“We are not going to move away from that position -- there must be a special fund to address the issue of loss and damage,” Joseph said in an interview. “It would be a severe setback for future COPs.”

In some conference halls, the mood was more optimistic on finding common ground over loss and damage. Frans Timmermans, the EU’s climate chief, signaled in a press conference at the talks on Tuesday that the door could be open for compromise on an agreement to establish a facility over the coming days, suggesting that not every detail needed to be worked out by the end of the summit.

“I’m not quite sure we would be able this week to find consensus on the new financial mechanism, but I don’t want a conclusion this week with the lid screwed on so that you can’t progress in that discussion beyond Sharm El-Sheikh,” he said.

--With assistance from John Ainger and Akshat Rathi.