Chinese copper smelters grappling with a shortage of semi-processed material are set to see an influx of supply from South America, a sign that the tightness helping supercharge the metal’s rally may be easing.

Starting next month, there’ll be a large number of ships arriving at Chinese ports from Chile and Peru, the nation’s main suppliers, as bottlenecks ease, according to IHS Markit lead shipping analyst Daejin Lee. The amount of concentrate expected to reach the Asian nation may climb almost 60 per cent from February’s volume, he estimated.

“The narrative could be shifting from very tight supply on account of port congestion and logistics difficulties, and even the waves in Chile, to more easier supply,” said Ed Meir, an analyst with ED&F Man Capital Market. That could take a little bit of the air out of copper’s rally, he said.

Copper is nearing a record and heading for an unprecedented 11th monthly gain on expectations that a rebound in growth, aided by government pledges to invest in green infrastructure, will spur a deficit. Tightness in the concentrate market -- driven by low feedstock inventory, high freight rates and logistical challenges -- has already pushed Chinese processing fees to multi-year lows and sparked concerns of output cuts that would further reduce metal supply. 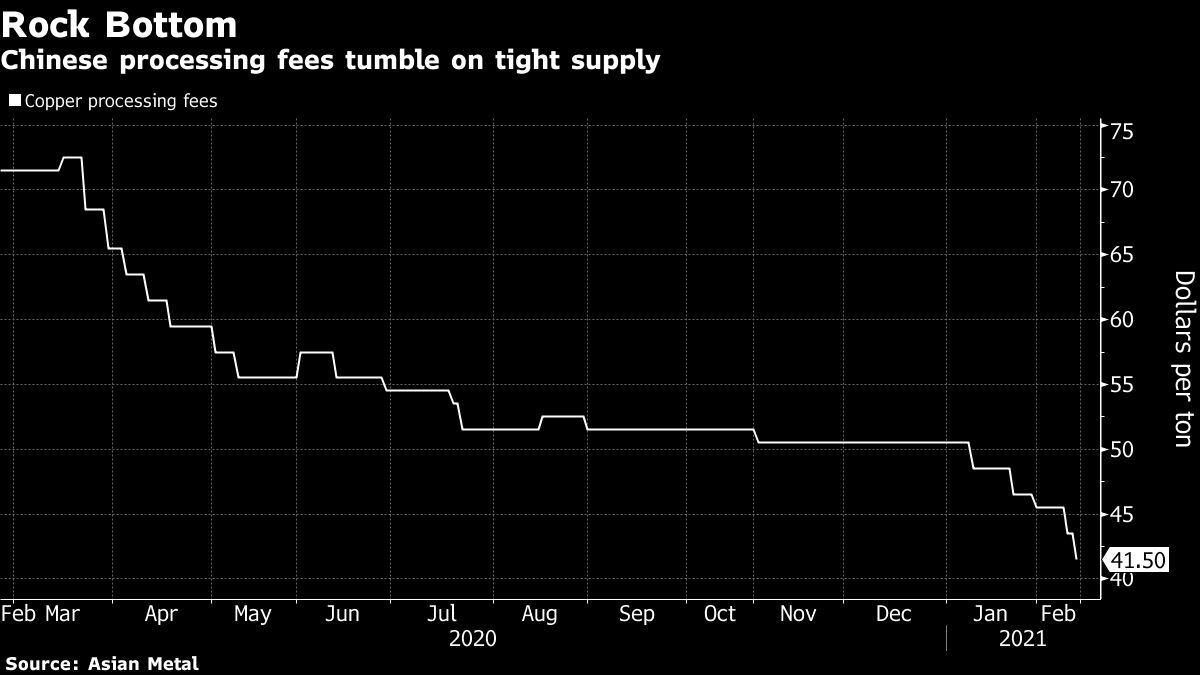 The pickup in imports coincides with an expected ramp up in China after the Lunar New Year, while treatment charges have probably already hit bottom, Che Guojun, an analyst with state-backed researcher Beijing Antaike Information Development Co.

It also came just as Chile, the largest copper-producing country, reported its worst month of output since pandemic lockdowns began. In January, production fell 8.3 per cent from the previous month to the lowest level since February last year, according to data released Friday by the National Statistics Institute.

Copper on the LME fell 2.4 per cent to US$9,190.50 a metric ton at 9:11 a.m. in New York. Global bonds steadied as markets returned to firmer footing at the end of a week that saw the steepest decline in the Nasdaq 100 since the pandemic meltdown.

“Surging interest rates weighing on risk appetite, along with the news suggesting that copper concentrate supply out of Chile and Peru could increase near 60 per cent in March, highlight the impact that easing of cyclical tailwinds can have on price action,” TD Securities analysts led by Bart Melek said in a note.

Meir also pointed to signs of increasing exchange inventories as a bearish indicator for the market, even as investors continue to pile into copper.

Stockpiles in London Metal Exchange warehouses jumped the most since November in tonnage terms on Wednesday and are heading for a second weekly increase. Inventories tracked by the Shanghai Futures Exchange rose to the highest in three months last week following a week-long Chinese holiday.

Part of copper’s climb from its March low was due to increased purchases of metals-intensive items such as electronics and appliances as more people worked from home, according to Meir. “When life returns to normal, there’ll be more travel and dining out and cruising and flying. The consumer is going to be spending less money on household stuff and electronics, and things like that. I’m not saying demand is going to collapse, but you’re not going to see this crazy demand surge for metals because everyone was stuck at home,” he said.

While there are other bears -- JPMorgan Chase & Co. and BMO analyst Colin Hamilton expect copper prices to decline over coming months -- some market watchers predict the rally isn’t over yet. Goldman Sachs Group Inc., BlackRock Inc., Citigroup Inc. and Bank of America see copper moving back toward all-time highs above US$10,000 a ton. Copper prices are still up more than 16 per cent in February and have more than doubled from their nadir in March.