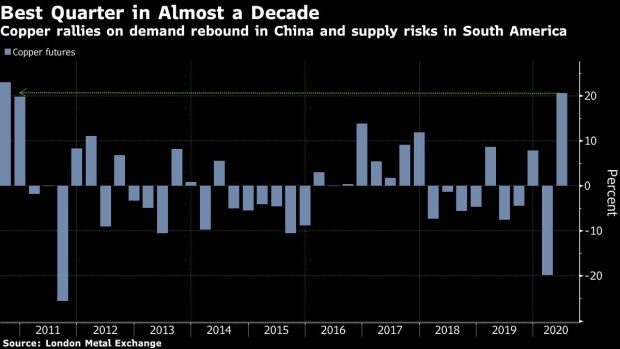 (Bloomberg) -- Copper is poised for its best quarter since 2010, helped by optimism over a stronger-than-expected demand rebound in top consumer China and mounting supply concerns in South America.

The metal used in everything from automobiles to electronics has surged 21% this quarter, and climbed above $6,000 a metric ton last week for the first time since the Covid-19 outbreak became a global pandemic.

Prices have rallied steadily over the past three months, fueled by sentiment over consumption prospects as first China and then other large economies began to ease lockdowns. While a new wave of infections adds risk to the demand outlook, the market is getting support from global economic stimulus and concern over mine shutdowns. A report Friday showed hedge funds cut bearish bets on U.S. copper futures and options to the lowest since 2018.

“The basis of the copper rally was three-legged,” said Tai Wong, head of metals derivatives trading at BMO Capital Markets. “The Chinese economic recovery, despite clear warning signs, has surprised strongly versus market expectations; Covid-related supply disruption has been growing rapidly; and traders were fairly short copper and were forced to grudgingly cover throughout the quarter and are now finally small long.”

There’s growing risk to mining in top producer Chile given the continued spread of the virus there, Morgan Stanley analysts including Susan Bates said in a June 29 note. The bank estimates global mine-supply losses of 560,000 metric tons this year -- most of that due to Covid-19 -- and sees demand outstripping production amid mined- and scrap-supply disruptions.

The rebound in prices has been a boon to miners. The BI Global Copper Competitive Peers index of 30 companies is set for its best quarter since the data series started in 2005. Freeport-McMoRan Inc., Hindustan Copper Ltd. and Hudbay Minerals Inc. are all up more than 40% since the end of March.