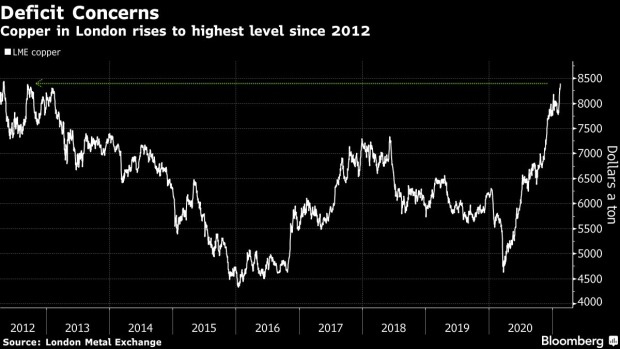 (Bloomberg) -- Copper rallied to the highest level since 2012 on concern over a market deficit driven by tight supply and strong demand. Most other main base metals also gained ground, with nickel and tin among the leaders.

The metal used in pipes and wires has rallied on optimism that the use of coronavirus vaccines will aid a rebound in global growth and spur demand. There’s also been speculation more factories in China will have remained open during the Lunar New Year holiday. U.S. markets are shut for Presidents’ Day on Monday, while exchanges in China, Hong Kong and Taiwan are also closed.

Production guidance from the top 25 copper producers indicates the market may be in a sizable deficit this year, “assuming our scenario of 5% demand growth is in the ballpark,” according to Bloomberg Intelligence analysts Grant Sporre and Andrew Cosgrove. Aggregated mined-supply guidance is more than 400,000 tons shy of BI estimates, suggesting a shortfall close to half-a-million tons. Copper’s on course in February to post an 11th monthly gain.

Commodity Titans to Weigh In on Supercycle Talk as Prices Rally

Copper is “being driven by a cocktail of positive factors -- including rising inflation expectations caused by U.S. stimulus, a falling dollar, and historically low stocks,” said Gavin Wendt, a senior resource analyst at MineLife Pty. “The 2021 copper production outlook is likely to be negatively impacted as a result of Covid in a number of major South American producing nations.”

The most-active May iron ore contract traded at $152.65 a ton on the Singapore Exchange, with holidays in China keeping trade muted. Key earnings reports are due this week from mining powerhouses BHP Group and Rio Tinto Group.