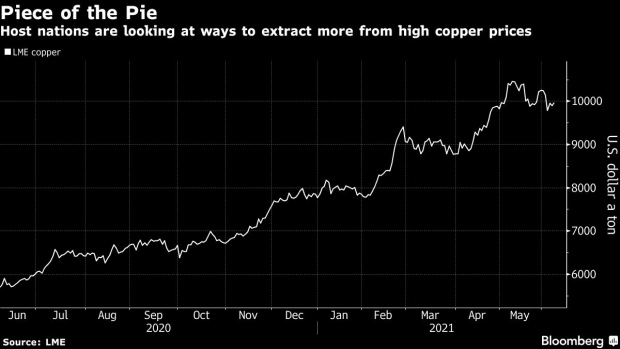 (Bloomberg) -- The man who early polling suggests will be Chile’s next president plans to raise mining taxes in coordination with neighboring nations and take equity stakes in copper mines in a bid to retain more mineral wealth.

Daniel Jadue, the current front-runner in polls for November’s elections in Chile, wants to align mining rules with Peru, Argentina and Bolivia so they don’t compete for investments, he said in an interview Wednesday. Like Indonesia has done, he also plans to renegotiate with foreign companies to take stakes in their assets in what would be the industry’s biggest disruption since U.S.-owned mines were nationalized to form Codelco in the 1970s.

If Jadue wins office he would become Chile’s first ever Communist Party president, ratcheting up regulatory risks for global miners like BHP Group and Anglo American Plc. A rewriting of mining rules in a country that accounts for a third of the world’s copper could temper future projects needed to fill supply gaps of a crucial metal in the transition away from fossil fuels.

To be sure, much could change in the five months before elections and, even if he won office, Jadue said he would respect stability contracts signed with miners through 2023.

Still, his emergence reflects a sharp shift away from moderate politics in the wake of civil unrest that begin almost two years ago. The center-right ruling coalition is fighting a bill presented by the opposition to introduce a copper windfall tax, while an assembly elected to write a new constitution is comprised mainly of independents and left-wingers.

With copper prices near record-high levels, some host nations are looking to increase their share of the windfall in an effort to address economic inequalities. Pedro Castillo, who looks set to be Peru’s next president, vowed to nationalize assets early in his campaign before focusing on overhauling the tax system for miners. Peru is the largest producer of copper after Chile.

“We will never again allow economic returns that transnationals take from our country, especially those in extractive activities, to continue to function in the same way,” he said. “Here there is an economic return that Chile must rescue.”