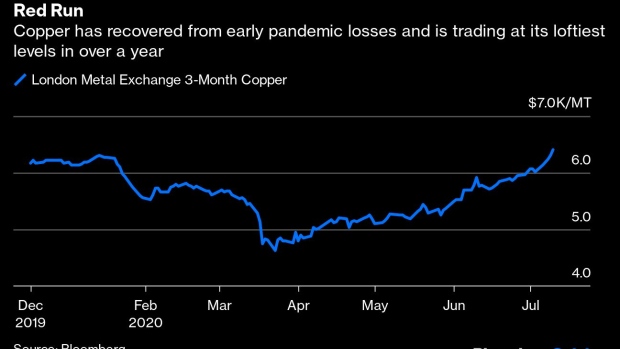 CHILE - OCTOBER 10: A worker secures copper plates before they are shipped at the Anglo American PLC Los Bronces (Minera Sur Andes) copper mine in central Chile, October 10, 2006. Copper futures on the Shanghai Futures Exchange surged after an earthquake in Chile, the world's largest producer of the metal, knocked out power to a dozen mines and reduced output. (Photo by Alejandra Parra/Bloomberg via Getty Images) , Bloomberg

(Bloomberg Opinion) -- Copper has erased losses racked up in the early months of the coronavirus outbreak. China’s economic uptick, set to be confirmed by second-quarter figures this week, is encouraging an optimistic view of demand. Latin American supply constraints may be a bigger factor in propelling the price higher, though, with pandemic-related closures and the prospect of strikes ahead. Neither threat will ease soon.

China, which accounts for roughly half of global copper demand, is certainly doing its bit to encourage bulls. Industrial production rose 4.4% from a year earlier in May and is likely to have accelerated further in June. Gross domestic product will expand 3.4% in the second quarter, Bloomberg Economics forecasts, after contracting in the first three months.

Property sales in major cities like Beijing and Shanghai rose above pre-pandemic levels in mid-June. Appetite elsewhere is recovering more slowly — a problem, given almost a third of mainland copper consumption is eventually exported — but China has unquestionably helped the metal’s recovery from its March lows. Copper has climbed about 40% since then, and is up more than 6% this year to just shy of $6,600 per metric ton on the London Metal Exchange.

The spotlight is now moving. After an initial lift from demand, it is output that is pushing prices higher, as some of the world’s largest producers struggle to contain the Covid-19 epidemic. A forecast 2020 copper surplus is beginning to look like a potential deficit.

The headache? Latin America, which has turned into a coronavirus hotspot, owing to a combination of bad policies and poverty. The region, including Peru and Chile which alone make up 40% of global copper production, now accounts for more than a quarter of daily incremental Covid cases and over two-fifths of the world’s new deaths. Peru shut down swiftly, but its recovery has been slow. Chile, which has so far allowed mines to keep moving with reduced crews and avoided pit lockdowns, now has one of the world’s highest infection rates.

Take the world’s largest copper miner, Chile’s state-owned Codelco. It has tightened safety measures, halted smelting activities and slashed staff at its Chuquicamata mine. Its El Teniente expansion is on hold. Still, the company says it has now registered 3,215 infected workers, implying an infection rate far above the general Chilean population.

That suggests more restrictions are likely, and that projected output for the top copper-producing nation will be impossible to sustain. Even an official estimate last month that put the Chilean drop this year at 200,000 metric tons — roughly 1% of annual global production — may be optimistic if infection rates don’t improve. Unions, meanwhile, may begin to agitate more loudly over safety and other worries. The pandemic isn't putting off existing disputes. Workers at Antofagasta Plc’s Zaldivar mine have rejected a final wage offer and voted to walk out. At BHP Group’s Escondida, an early retirement offer has gone down badly. Post-coronavirus efforts to increase efficiency there are elsewhere won’t do much better.

The copper market is used to supply disruptions: Strikes and outages are annual occurrences. Yet problems are beginning to pile up, against the backdrop of a stronger-than-expected Chinese recovery and limited stockpiles that have  magnified the price impact of any hiccups. Global visible inventories have declined 30% since March, according to Jefferies. That’s good news for miners like Freeport McMoRan Inc., which has said the expansion of its Grasberg mine in Indonesia is on track. That may well change with a smaller team onsite, but Freeport shares have more than doubled since March. Speculators adding to bullish copper bets will help.

The bigger question is what this means for supply beyond the next few months. Production was constrained even before the coronavirus. Now, projects have been pushed back, while exploration and development budgets have been trimmed across the sector. Financially squeezed, Codelco in particular could see expansions shelved. And copper is still trading below prices that would get miners racing to dig again — that in theory requires at least $7,000 per metric ton, a level last hit more than two years ago.

Supply pressures are here to stay.