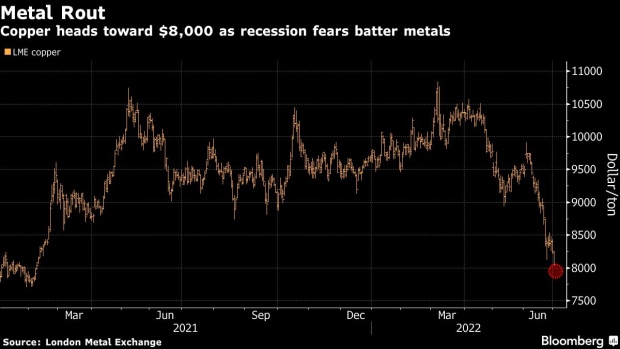 (Bloomberg) -- Copper sank to its lowest since early 2021, deepening a metals rout that’s gathered pace as fears of a global economic slowdown intensify.

The metal sometimes considered a barometer of the world economy slumped as much as 2.8% to $8,030 a ton on the London Metal Exchange, the lowest since February 2021 and heading toward the key threshold of $8,000. Investors appear increasingly convinced that growth is set to fade amid tightening monetary policy and an energy crisis centered on Europe.

“There are mounting concerns around the global demand,” Wei Lai, an analyst with TF Futures Co., said by phone from Shanghai. The copper market will face a surplus of about 10% of the total supply in the coming two years based on scenario of a hard landing for the US and European economies, with the weak recovery in China unable to offset global declines in demand, he added, citing an estimate from the broker.

Aluminum and zinc also extended losses, opening the second half on a gloomy note after the LME’s index of six base metals racked up its steepest quarterly slump decline since the 2008 financial crisis. Stocks and equity futures also retreated on Friday.

The fresh declines came amid some more positive signs from China, the top metals-consuming economy. Demand there is gradually recovering from Covid lockdowns, while the government is boosting stimulus including more cash for infrastructure spending. The nation’s property market slump eased in June, and manufacturing activity also bounced back more strongly than expected.