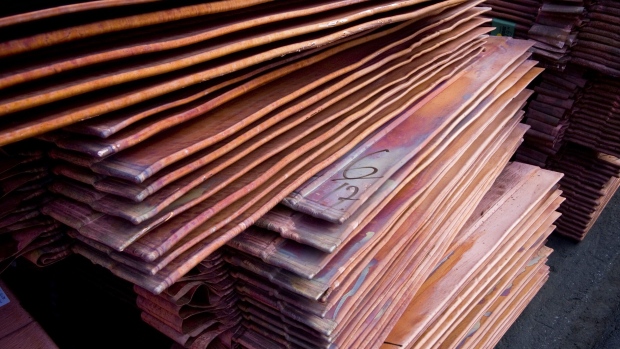 A stack of copper slabs sits in the warehouse. Photographer: John Guillemin/Bloomberg , Bloomberg

(Bloomberg) -- Jetti Resources LLC, a copper-mining extraction company backed by some of the world’s biggest producers including BHP Group, raised funds at a valuation of $2.5 billion as it seeks to capitalize on growing concerns about the future supply of the metal.

Jetti tapped existing investors as well as new backers at a valuation that’s about double its last raise, according to people familiar with the situation who asked not to be identified as the details are private.

The world’s biggest miners are bullish on the outlook for copper, expecting demand to climb as a greener world requires more of the metal in everything from electric vehicles to new power grids. Yet future supply looks increasingly constrained with new projects hard to find, and building new mines often takes decades.

Jetti, headquartered in Boulder, Colorado, has developed a catalyst that can liberate copper from low-grade chalcopyrite ores -- which can have a metal content of well below 1% -- by disrupting the sulfur metal bond of the mineral. Traditional leaching methods, which dissolve the metal to form a weak solution of copper sulphate, lead to a film forming over the copper in these ores, preventing it from being extracted.

The company already operates a commercial plant at a mine in Arizona run by Capstone Copper Corp. and is in talks with other miners about rolling out further plants.

Jetti said in a statement that it’s raised $100 million in its Series D financing and it will use the funds to deploy its technology at new sites.

“This financing enables Jetti to meet the significant growth in demand for our technology by major copper mining companies,” Jetti Chief Executive Officer Mike Outwin said in the statement.

“The Jetti team has built an impressive pipeline of growth opportunities and we are excited by the scale of the opportunity the technology represents,” said Charles-Edouard Bilbault, a portfolio manager at Rothschild & Co.

The raise comes as the world’s two biggest miners -- BHP and Rio Tinto Group -- are both pursuing their first major deals in years, both targeting growth in copper. The metal hit a record high earlier this year, before falling back amid a wider global economic slowdown.