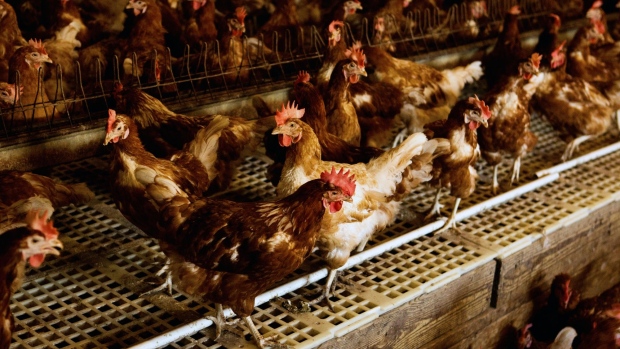 Chickens at Brown's Farm, which produces sustainable eggs for NestFresh, in Gonzales, Texas, U.S., on Wednesday, May 5, 2021. Farmers are betting they can profit further with specialty eggs by adding another layer of premiumization: eggs from a special type of sustainable farm that can be trumpeted as being better for the planet. , Bloomberg

(Bloomberg) -- Union Pacific Corp. and poultry producer Foster Farms said enough corn shipments have been made to replenish feed stocks after delayed trains in recent months caused inventories to drop to critical levels. Millions of chickens at Foster Farms facilities were at risk of going unfed because of the rail delays.

The US Surface Transportation Board, which regulates railroads, had ordered Union Pacific to provide trains loaded with corn on Dec. 30 after the poultry farm warned about running out of feed for its chickens and its customers’ dairy cattle. The farm said it needed to divert supplies away from its customers to feeding its chickens, which kill each other when they go hungry.

Six trains loaded with corn have been delivered since the board’s action, Livingston, California-based Foster Farms said in a statement on Friday.

“Foster Farms’ grain inventories are currently at levels that enable us to meet the nutritional requirements of all flocks in our care, and bird health is not at risk,” the poultry producer said in the statement. “All Foster Farms facilities are operating.”

Foster Farms said in its December request to the regulator that Union Pacific’s delays had been ongoing since February. The Surface Transportation Board had previously issued a service order to Union Pacific in June after Foster Farms complained of a critical shortage of animal feed.

Inclement weather this winter, including snow storms that swept across the Midwest, flood damage in California and rockslides in Nevada, had contributed to the recent disruptions in its service, Union Pacific previously told Bloomberg News.

Union Pacific said in a separate statement that it has worked closely with Foster Farms and the Surface Transportation Board to implement a service plan while voluntarily providing service updates and information “regarding weather challenges severely impacting our network and future deliveries.”

“While we have made incremental progress reducing network congestion and increasing velocity, we are still seeing longer than anticipated recovery due to residual weather impacts,” Union Pacific said in the emailed statement sent on Jan. 14. “We continue to work closely with all of our customers to reduce congestion and improve service.”

Union Pacific, the second-largest railroad in North America, is the only one with direct access to provide service to Foster Farms. The poultry producer has said in federal filings that it’s not viable to truck in corn because of capacity and cost constraints. For every train with 100 cars of corn, it requires 400 trucks to carry the same volume.

“We have a long working relationship with Union Pacific, and it is our hope that more reliable service standards can be maintained, and further disruptions minimized,” Foster Farms said in its statement.