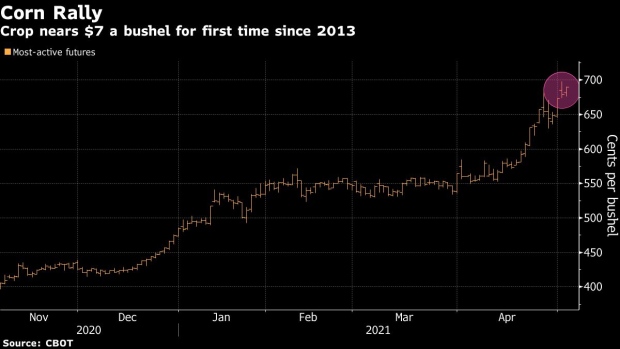 A corn field in San Luis Potosi, Mexico, on Sunday, Feb. 7, 2021. Mexico's corn imports could fall by about 9% this year, as the government seeks to discourage the use of genetically modified grains and boost its local crop, the agriculture ministry said on Tuesday. , Bloomberg

(Bloomberg) -- Corn futures extended a rally toward $7 a bushel, as ongoing drought in Brazil threatens supply in the world’s second-largest exporter.

Prices rose as much as 2.1% to near an eight-year high. Dryness is hampering the country’s key second-crop corn, and rain in the coming week will fail to reach some key growing areas, according to Somar. That could further hurt yields, and analysts including Safras and StoneX Brazil have cut estimates for the coming harvest. A production shortfall there would compound stretched global grain supplies and risk further stoking food inflation.

“The situation is critical in Brazil,” Paris-based adviser Agritel said in a report. “This should further strain the global balance sheet, while the U.S. will have to partly compensate for the drop in South American exports.”

Most-active corn futures climbed 1.9% to $6.9225 a bushel in Chicago. Soybeans and wheat also both rose. The rally across grain markets prompted major crop trader Bunge Ltd. on Tuesday to raise its earnings outlook for 2021.

Still, there are signs of better conditions in other major shippers, which may help cool the market. U.S. farmers are planting corn at the fastest pace in years, thanks to warm, sunny weather. Sowing is about halfway complete, the latest government data show. Early signs also point to a record-large crop in Ukraine, consultant SovEcon estimates.

The good U.S. conditions -- coupled with high prices -- has increased speculation in the market that farmers will end up with more corn acres than the U.S. Department of Agriculture is currently predicting. The agency will update its forecasts at the end of June.