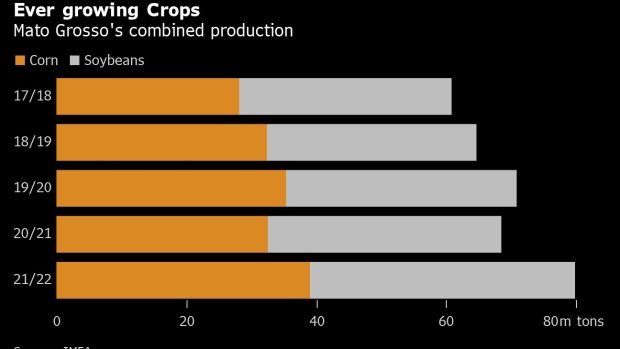 (Bloomberg) -- Corn is stacking up outside of Brazilian silos at the fastest rate in years after the country’s biggest-producing region harvests a bumper crop.

Warehouses are still full of soybeans, which are reaped only a few months before the corn. In Mato Grosso, soy production was also huge this season and sales have been slower than usual, leaving the warehouses with no room to receive the corn, according to Cleiton Gauer, superintendent at IMEA, Mato Grosso’s rural economy institute.While it’s not unusual for crops to be stored in the open when indoor capacity fills up, it hasn’t been seen at such a scale for at least the past two years. But as Mato Grosso’s huge corn harvest gets pace, farmers and traders have been especially short of room.

The pileup threatens to add further pressure to corn and soy prices that are already slumping in Chicago futures markets amid promising weather in the US growing areas. Corn sank Thursday to the lowest level since before Russia invaded Ukraine, while soybeans touched the lowest level since January with edible oil supply picking up and a broader commodities malaise. The slide in crop futures offers a glimmer of optimism that food inflation may be tempered in coming months, even as prices remain historically high.

At the end of May, around 11 million tons of soybeans in the state were still on farmers’ hands, compared with 5.5 million tons a year earlier, according to Daniele Siqueira, an analyst at AgRural consultancy firm. This month, soy sales have accelerated on a weaker real, improving demand and the pressure to get the oilseed out of the bins, she said.

Another reason for the lack of room is how fast the harvest is happening in Mato Grosso. On June 17, reaping was 27% complete, compared to 4% a year earlier and the five-year average of 14%, according to Imea. The state is expected to collect 39 million tons of corn, rising 20% from past season. That’s about a third of Brazil’s production, that may also reach a record at 115.2 million this season, according to Brazil's national company Conab.