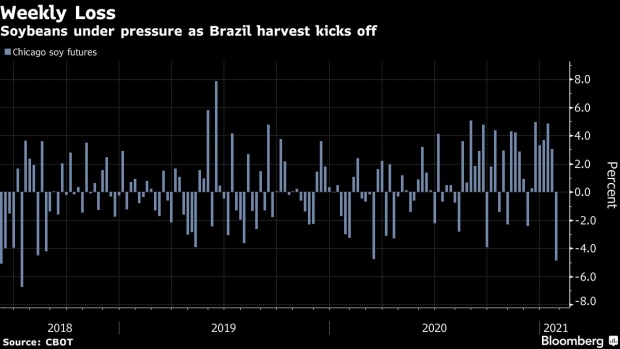 A worker sits next to a pile of corn inside a grain storage bin at the Centerra Co-op grain facility in Mansfield, Ohio, U.S., on Wednesday, June 3, 2020. The United States Department of Agriculture (USDA) is scheduled to release the World Agricultural Supply and Demand Estimates (WASDE) report on June 11. Photographer: Dane Rhys/Bloomberg , Bloomberg

(Bloomberg) -- Corn prices plunged the most in 17 months, pacing a rout in agriculture futures on escalating coronavirus woes and a rally by the dollar.

“It’s brutal,” said Matt Bennett, co-founder of AgMarket.net and an Illinois farmer. “It looks to me like the funds are selling the heck out of corn and beans, which is interesting because we had huge export sales” reported earlier in weekly data from the U.S. Department of Agriculture, he said.

On Friday, Covid-19 restrictions tightened from Germany and the U.K. to Hong Hong, and the European Central Bank cautioned that the euro area is headed for a double-dip recession. A gauge of the dollar snapped a four-day slump, damping the appeal of raw materials priced in the greenback.

Corn futures for March delivery tumbled 4.5% to close at $5.005 a bushel on the Chicago Board of Trade, the biggest drop for a most-active contact since Aug. 12, 2019. Earlier, the price fell by the exchange limit of 25 cents. This week, the grain slumped 5.8%, the most in 10 months.

Soybean production in Brazil, in the world’s biggest grower, may be 132.4 million tons, said Andre Pessoa, president of Agroconsult. While the forecast eased from November, the projection still marked a record high. Average yields have climbed, and recent conditions have been favorable.

Oat futures tumbled by the exchange limit of 20 cents a bushel to the lowest this year before paring losses. Soybean meal dropped 3.8%, and soybean oil fell 2.7%.