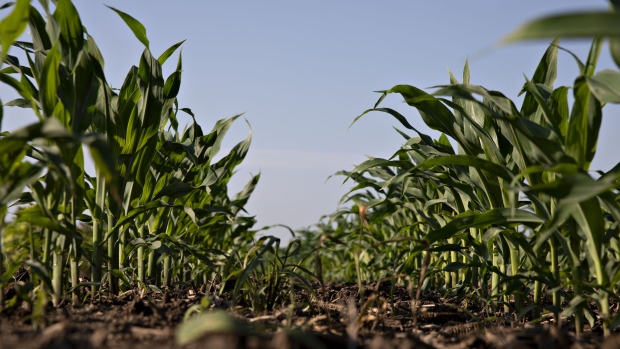 Corn plants grow at a farm near Buda, Illinois, U.S., on Tuesday, July 2, 2019. The USDA's World Agricultural Supply and Demand Estimates (WASDE) report is scheduled for release on July 11. , Bloomberg

Corn futures slumped after the U.S. Department of Agriculture delivered a production forecast that was bigger than analysts expected as plants have been able to do relatively well despite a delayed growing season.

Record spring flooding led to a historically delayed planting season in the Midwest. The late start meant many analysts and traders have been expecting a negative impact for yields. But crops have proved to be resilient, partly thanks to better weather as the growing season progressed. The USDA has consistently delivered a rosier outlook for supplies than the market predicted, sparking a slump for prices.

Still, harvesting is behind normal stages for many farmers. That means crops are vulnerable to bouts of cold, especially with snow forecast for swaths of the U.S. Plains and Midwest this week that could end up stifling yields.

A “slight decline for acreage and the increase in yields, those are reasonable given the early harvest reports,” said Rich Nelson, chief strategist at Allendale Inc. in McHenry, Illinois. “Some of that will be trimmed by this week’s storm, but won’t hit it too much.”

Soybean futures moved in the opposite direction, gaining in Chicago after the USDA lowered its production estimate for the oilseed to 3.55 billion bushels, trailing the average analyst estimate. Cotton estimates were broadly in line with expectations, with prices little changed as a result.