Corn futures surged above US$7 a bushel for the first time in more than eight years as lack of rainfall in Brazil added to supply concerns.

Corn climbed as much as 3.5 per cent to US$7.0325 a bushel on the Chicago Board of Trade, the highest since March 2013. Soybeans and wheat also both rose.

The rally across grain markets prompted major crop trader Bunge Ltd. on Tuesday to raise its earnings outlook for 2021 by as much as 25 per cent above its previous forecast. The St. Louis-based company, which posted first-quarter earnings that were double analyst projections, is betting on strong demand for crops as the world emerges from the pandemic, China scoops up American supplies and the renewable diesel industry expands. 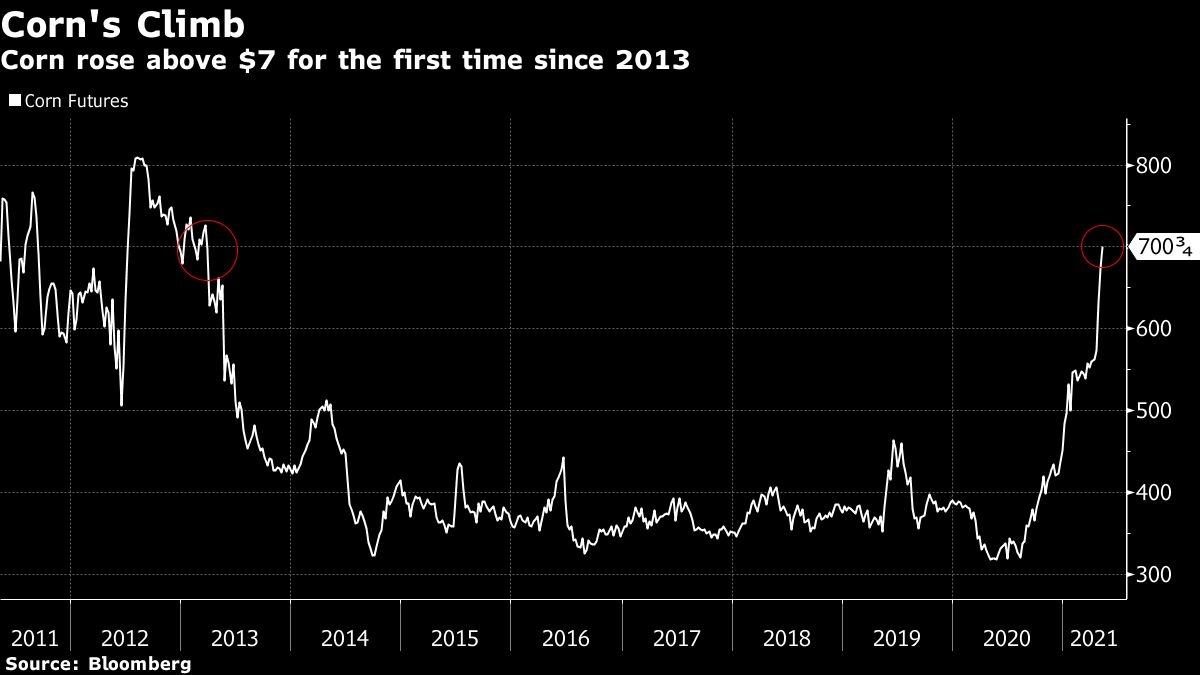 Bunge Chief Executive Officer Greg Heckman said that even with the surge in prices, he’s seeing “no demand destruction” right now, with livestock operators showing profitability and willing to pay the higher prices.

“We are optimistic that the favorable demand environment in the first quarter will continue through 2021,” Heckman said Tuesday.

Dryness is hampering Brazil’s key second-crop corn, and rain in the coming week will fail to reach some key growing areas, according to Somar. That could further hurt yields, and analysts including Safras and StoneX Brazil have cut estimates for the coming harvest. A production shortfall there would compound stretched global grain supplies and risk further stoking food inflation.

“The situation is critical in Brazil,” Paris-based adviser Agritel said in a report. “This should further strain the global balance sheet, while the U.S. will have to partly compensate for the drop in South American exports.”

Corn futures in Brazil rose to a record high this week on Sao Paulo’s B3. The most-active contract headed for a third straight gain on Tuesday as weather conditions deteriorate in key areas of the second corn crop. The futures have jumped 140 per cent in 12 months on the B3.

There are signs of better conditions in other major shippers, which could help cool the market. U.S. farmers are planting corn at the fastest pace in years, with sowing almost halfway complete, government data show. Early signs also point to a record-large crop in Ukraine, consultant SovEcon estimates.