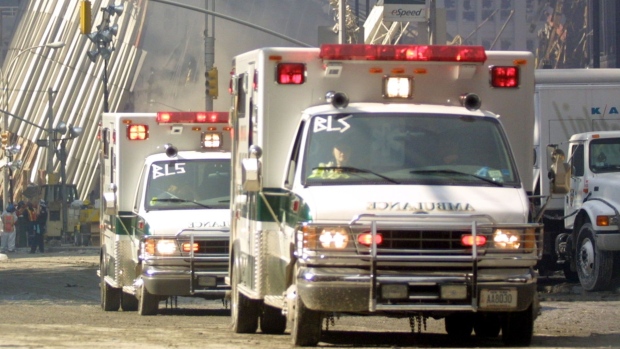 Michael Hollander has prostate cancer, thymus cancer, chronic obstructive pulmonary disease, asthma, and has had a piece of his heart removed — all linked to his emergency medical response to the terrorist attacks on Sept. 11, 2001.

He’s among tens of thousands of emergency medical responders, police officers, and firefighters who breathed toxic dust from the collapse of the World Trade Center, and who now have an elevated risk from coronavirus, according to doctors who treat them.

“When things started to go haywire in March, we started getting calls,” said Dr. Michael Crane, medical director of the World Trade Center Health Program Clinical Center of Excellence at Mount Sinai. That program, the largest nationally, works with about 22,000 patients annually who responded to the terror attack.

Cancer, asthma, and COPD are the most common illnesses suffered by those who breathed toxic dust on Sept. 11, 2001, Crane said in a telephone interview.

Once the pandemic hit, it was hard for many of those survivors to differentiate between Covid-19, the disease caused by coronavirus, and the health conditions they already live with such as shortness of breath, a cough, trouble breathing, and lost sense of smell.

Adding to their stress, in the early stages of the outbreak tests were scarce, and there was concern about sending the 9/11 patients to emergency rooms, he said.

About 200 patients have told the center they’ve tested positive for Covid-19, Crane said. Eight have died.

Covid-19 causes a “tremendous amount of inflammation, a tremendous amount of shortness of breath, and loss of potential lung function,” said Dr. Anna Nolan, associate professor of medicine and environmental medicine at the New York University Grossman School of Medicine, who has studied the loss of lung function in firefighters who responded to the World Trade Center.

Anyone with an underlying lung disease would be more susceptible and at risk of contracting Covid-19, she said. “It’s a very devastating disease.”

Those with cancer have suppressed immune systems on top of the other illnesses, making them an “extremely high risk,” said Dr. Dean Hart, a microbiologist and retired ophthalmologist who treated first responders on Long Island.

“The whole thing is a mess for those people still living with the aftereffects of 9/11,” he said.

Of those who have responded to surveys from the Long Island center, about 184 reported contracting Covid-19, and about 20 to 30 have been hospitalized, Luft said. Five of them have died as a result of the virus, Luft said. “This pandemic is brutal.”

About 100 patients have needed additional counseling and help, Luft said.

The lack of personal protective equipment in the early weeks of the virus, became “reminiscent of what they were going through in 9/11,” he said. Many have had flashbacks and a recurrence of post-traumatic stress disorder, Luft said.

Hollander, 65, has been able to continue working as a restaurant manager, though he can find it hard to breathe -- a reminder of working in the World Trade Center rubble as a Nesconsent Fire Department volunteer.

His team’s job at Ground Zero was to locate bodies.

“We all went there to save people,” he said. When they got to lower Manhattan there was six inches of dust and “no one to save.”

He still goes on runs as an advanced emergency medical technician, though there are calls the Nesconset dispatcher won’t assign to him or the more than 30 others with 9/11-related illnesses.

“We just remind each other not to get crazy,” Hollander said, and to be diligent about precautions such as safety glasses, masks, and hand-washing. One thing the 9/11 responders won’t do is stop volunteering. “They are heroic and altruistic, and they never stop giving, ever,” Crane said. “So they will still walk into the burning building. They will still go and rescue the child. They put themselves at risk for their entire careers.

“Even this hasn’t stopped them,” he said. “These are freakin’ heroes.”

To contact the reporter on this story: Keshia Clukey in Albany, N.Y. at kclukey@bloomberglaw.com

To contact the editors responsible for this story: Katherine Rizzo at krizzo@bgov.com; Heather Rothman at hrothman@bgov.com