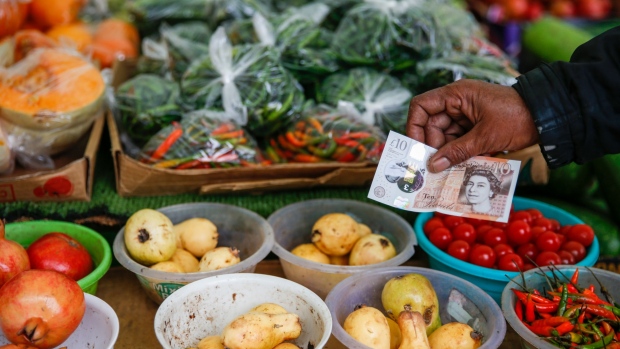 A customer holds a 10-pound banknote over fruit and vegetables in an arranged photograph at Chrisp Street Market in Poplar, London, U.K., on Thursday, Aug. 27, 2020. , Bloomberg News

The new coronavirus may remain infectious for weeks on banknotes, glass and other common surfaces, according to research by Australia’s top biosecurity laboratory that highlights risks from paper currency, touchscreen devices and grab handles and rails.

Scientists at the Australian Centre for Disease Preparedness showed SARS-CoV-2 is “extremely robust,” surviving for 28 days on smooth surfaces such as glass found on mobile phone screens and plastic banknotes at room temperature, or 20 degrees Celsius (68 degrees Fahrenheit). That compares with 17 days survival for the flu virus.

A customer holds a 10-pound banknote over fruit and vegetables in an arranged photograph at Chrisp Street Market in Poplar, London, U.K., on Thursday, Aug. 27, 2020. Healthy and nutritious food is getting out of reach for millions, and in countries like the U.K. obesity is on the rise.

Virus survival declined to less than a day at 40 degrees Celsius on some surfaces, according to the study, published in Virology Journal. The findings add to evidence that the Covid-19-causing coronavirus survives for longer in cooler weather, making it potentially harder to control in winter than summer. The research also helps to more accurately predict and mitigate the pandemic’s spread, the scientists said.

“Our results show that SARS-CoV-2 can remain infectious on surfaces for long periods of time, reinforcing the need for good practices such as regular hand washing and cleaning surfaces,” said co-author Debbie Eagles, the center’s deputy director, in an emailed statement Monday.

The coronavirus is transmitted mostly through direct contact with an infected person, especially the virus-laden particles they emit while coughing, sneezing, speaking, singing and even breathing. SARS-CoV-2 may also contaminate surfaces when these particles settle, creating so-called fomites that the researchers said may play a lesser, though important role in transmission of the virus.

“It does raise some critical issues around the need to keep on disinfecting surfaces, even when community cases are low,” said Trevor Drew, the center’s director and another co-author, in an interview. “We still need to carry out those disinfection regimes, both personally and at a public level, even when there don’t seem to be any cases around because there
may well be some residual virus that you’ve missed.”

SARS-CoV-2 spread via fomites is plausible, researchers at Kansas State University said in a study released ahead of publication and peer review in August. They analyzed the coronavirus’s stability on a dozen surfaces and found it survived five-to-seven times longer under cooler, less-humid spring/fall conditions compared with the average temperature and humidity in summer.

The finding bodes badly for controlling COVID-19 during the Northern Hemisphere winter, said virologist Juergen Richt, who led the research. “If we couldn’t control it very well during the summer, we are in for a big surprise,” Richt said in an interview.

“If we couldn't control it very well during the summer, we are in for a big surprise.”

Scientists at the Australian government laboratory have determined virus survival previously for hundreds of different viruses. They found in the case of SARS-CoV-2 that it survives longer on nonporous or smooth surfaces, compared with porous complex surfaces, such as cotton.

The research received funding from Australia’s defense department. It involved drying the coronavirus in an artificial mucus on different surfaces, at concentrations similar to those reported in samples from infected patients, and then re-isolating the virus over a month. The study was also carried out in the dark, to remove the effect of ultraviolet light, as research has demonstrated direct sunlight can rapidly inactivate the virus.

The time taken to achieve a 90 per cent reduction in the amount of virus present on the surfaces studied under different temperatures is tabled below:

“While the precise role of surface transmission, the degree of surface contact and the amount of virus required for infection is yet to be determined, establishing how long this virus remains viable on surfaces is critical for developing risk mitigation strategies in high contact areas,” Eagles said.

The persistence on glass is an important finding, given that touchscreen devices such as mobile phones, bank ATMs, supermarket self-serve checkouts and airport check-in kiosks are high touch surfaces which may not be regularly cleaned and therefore pose a transmission risk of SARS-CoV-2, the researchers said in the paper.

They found the longer survival time of SARS-CoV-2 than seasonal flu on banknotes “of particular significance, considering the frequency of circulation and the potential for transfer of viable virus both between individuals and geographic locations.”

Before SARS-CoV-2 was declared a pandemic, China had started decontaminating its paper currency, suggesting concerns over transmission via paper banknotes existed at the time, the researchers said, noting that the U.S. and South Korea have also quarantined bank notes as a result of the pandemic.

The survival of the coronavirus on stainless steel at cooler temperatures may help explain COVID-19 outbreaks linked to meat processing and cold storage facilities, the authors said. Their data support the findings of a study showing the survival of SARS-CoV-2 on fresh and frozen food as well, they said.

A reduction in temperature to about 6 degrees Celsius correlates with about a 10-fold increase in the virus’s survival, Drew said. Blood and oils associated with fresh meat and fish processing and handling may also help to preserve the virus.

“It’s going to survive for much longer in cooler conditions, and that’s irrespective of whether it’s on a surface or whether it’s in the air,” Drew said. “This may help to explain why the sort of environments, such as slaughterhouses, would be potentially a more hazardous area.”