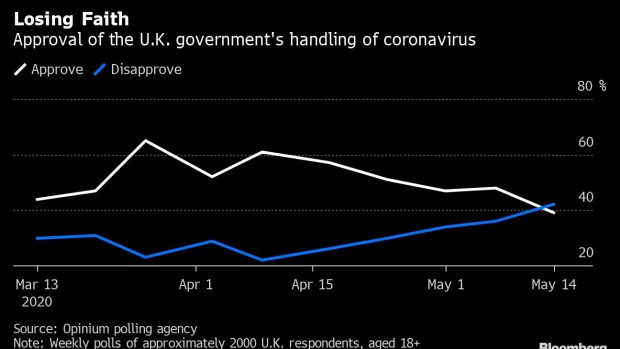 (Bloomberg) -- If a leader has a political weakness, novel coronavirus is finding it.

It’s too early to score countries on their overall responses to a pandemic whose life cycle is likely to be measured in years. Yet it’s clear already that some used the time they had to prepare and act in the critical, early stage of the outbreak far less well than others.In China, the virus revealed a damaging addiction to secrecy, shared by local officials and President Xi Jinping alike. U.K. Prime Minister Boris Johnson’s blustering approach to policy cost not only time, but almost his life. In the U.S., President Donald Trump’s chaotic management style and politicization of the outbreak appears to have hampered a rapid, coordinated federal response.In the age-old debate over whether leaders matter in deciding history, the answer from the first few months of 2020 is a resounding “yes they do,” says Francois Heisbourg, a former official in the French foreign and defense ministries who now advises the International Institute of Strategic Studies in London.

The costs of being found wanting are potentially high. The death toll from the virus to date is over 330,000, global supply chains have ruptured and millions of jobs have been destroyed. A Bloomberg Economics estimate, based on optimistic recovery scenarios, projects the pandemic will carve $6 trillion out of the global economy.

Much of the political impact from mistakes made has been obscured to date by a “rally around the flag” effect that has – with a few exceptions – shielded leaders across the board from criticism and seen their popularity rise, a pattern familiar from times of war. But that protective effect is starting to fade.On Wednesday, U.K. opposition Labour Party leader Keir Starmer attacked Johnson in Parliament for having been late to protect care homes from Covid-19, late to expand testing, and now late with the rollout of tracing and isolation policies that helped Germany and South Korea control the pandemic.The contrast between Johnson’s early counter-virus efforts and those of Germany, led by trained chemist and Chancellor Angela Merkel, is stark. The virus was discovered in both countries at the end of January, but by early March – a time when Johnson was still making a show of shaking hands in crowds - Germany was declaring a protective equipment emergency and was developing tests for mass production. The number of Covid-19 deaths per million inhabitants is now four times as high in the U.K. as in Germany.Urged by Johnson on Wednesday to be less negative and recognize the government’s plan to have a “world beating” test, track and isolate system in place by June 1, Starmer replied: “34,000 deaths is negative. Of course I’m going to ask about that.” On Thursday, the official fatality number stood at 36,042.

Still, Johnson has carefully deferred to scientists and made a big pitch to depoliticize the crisis by lavishing praise and attention on the National Health Service, sometimes described as the closest Britain has to a national religion. Not so Trump.Across the Atlantic, the crisis supercharged the president’s tendency to dismiss science, politicize the most technical of issues and institutions, and eschew international cooperation. He also muddied any consistent federal role or messaging by imposing himself in some areas while disclaiming responsibility in others, and by diverting attention to other issues with as many as 126 tweets in a day.It isn’t clear whether voters will see the resulting chaos as failure on Trump’s part when they decide whether to re-elect him on Nov. 3. In the latest Quinnipiac University poll, released on Wednesday, 50% of registered voters said they backed presumed Democratic nominee Joe Biden, against 39% for Trump.

China’s response revealed two core weaknesses of Xi and the one-party system he leads, according to Willy Lam, adjunct professor at the Center for China Studies in the Chinese University of Hong Kong. The first is a lack of transparency, from lowly officials reluctant to pass bad news upward for fear of damaging their careers, to Xi and other party leaders determined to announce only success.

The delays this caused in tackling the disease before it could spread abroad have cost Xi in terms of international soft power, says Lam. They also handed ammunition to Trump, as he sought to place blame for U.S. Covid-19 deaths on China and the World Health Organization.Xi’s iron grip on China’s institutions means “he remains as powerful as ever,” said Lam. Yet a second weakness exposed by the crisis – reliance of the unelected Communist Party on rapid economic growth for its legitimacy – could prove damaging, he added, as a global recession makes greater prosperity impossible to deliver.

In India, Prime Minister Narendra Modi retains strong popular support so far, even as economic hardship from the nation’s 50-day lockdown has begun to bite. Yet Modi suffers in comparison with his own nation’s Kerala state where, according to news reports, a health minister kept the population of almost 35 million all but untouched by launching an aggressive test, track and isolate operation in late January, long before the national government began to act in March.

Brazil’s President Jair Bolsonaro, who continues to deny the seriousness of the virus, looks more exposed. The former army captain has so far burned through two health ministers during the crisis and clashed with regional governors over lockdown restrictions, putting his lack of management experience into sharp relief. Until he became president last year, Bolsonaro had never held an executive role in government.

Leadership is just one factor that may explain the huge variations in the impact Covid-19 has had in different countries. Among the most important: whether nations had recent experience with similar epidemics, a reason nations in Asia and Australasia have tended to be more sure-footed in their responses. Other factors include age demographics, population density, health system capacity and culture.Still, leadership has an effect. In Russia, President Vladimir Putin’s reputation for crisis management has taken a pounding – and not necessarily because of Covid-19 infection or death rates. Anger is rising over damage to the economy, forecast to shrink 5.5% this year. With government coffers already suffering from low oil revenues -- made worse by Russia’s price war with Saudi Arabia -- and sanctions imposed after Russia’s 2014 annexation of Crimea, Putin has been either unable or unwilling to release sufficient funds to cushion the blow.“Resentment toward the authorities is far deeper than it was before the pandemic,” said Olga Kryshtanovskaya, a sociologist who studies the elite at the State University of Management in Moscow. A recent survey by the independent Levada polling agency gave Putin 59% support, down from 63% a month earlier and his lowest rating since 2000.In Russia, though, as in some other countries, it may be difficult to separate leadership missteps from those of the state. Heisbourg, the former French official, served on a pandemic preparation committee after SARS-CoV, or Severe Acute Respiratory Syndrome, threatened Europe in 2003. On its recommendation, France bought and stockpiled 1.25 billion face masks, among other measures, he says, but then failed to maintain the stocks as they expired over the years.Rather than acknowledge the mistake and correct it when the coronavirus struck this year, the French government spent weeks arguing that masks – ubiquitous in the fight against the virus in Asia -- had little utility. President Emmanuel Macron’s imperious style of governing, often described as Jupiterian, appeared to exacerbate a weakness that’s deep in the DNA of the French state.“We have a Napoleonic system,” said Heisbourg, “and in a Napoleonic system the state can do no wrong.”