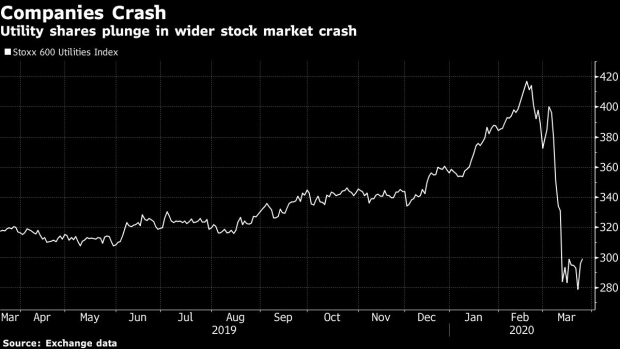 Cables hang from electricity pylons at the BritNed interconnector, a new 1-gigawatt electricity link between Britain and the Netherlands, operated as a joint venture between National Grid Plc and TenneT Holding BV, near Rochester, U.K., on Thursday, March 24, 2016. Photographer: Chris Ratcliffe , Bloomberg

The outlook for Europe’s utilities and power generators is worsening as the coronavirus curbs energy demand and prices plunge.

Utilities from Centrica Plc to EON SE are being hit on several fronts from lower consumption to customers not paying their bills, which may lead to earning downgrades. Analysts have also started to cut power price forecasts, indicating bleaker prospects for producers including Electricite de France SA and RWE AG.

“European utilities face consensus earnings downgrades amid lower demand and prices for energy and environmental services as disruptions from the Covid-19 pandemic progress,” said Elchin Mammadov, analyst at Bloomberg Intelligence. He picked out Centrica and EON as being particularly at risk.

Many of the companies were in a bind even before the virus hit. A glut in natural gas has driven prices down to their lowest in a decade, sending power down too. EDF, Europe’s biggest nuclear operator, said on Monday its profit forecast and nuclear output target could be revised down this year.

While Centrica declined to comment, EON on Wednesday said the pandemic would squeeze its profitability this year, adding it was too early to gauge the size of the impact. The company expects lockdowns in the countries in which it operates will continue to curb electricity demand and hamper sales as people stay away from workplaces. It also expects the completion of infrastructure projects such as those to build electric car charging apparatus won’t be completed on time.

Sanford C Bernstein & Co. said earnings at Centrica, RWE, Uniper SE, Naturgy Energy Group SA and Engie SA could be 7% to 21% lower in their base case. That could increase to 20% to 50% in a scenario based on “very low power prices.”

The threat of a drop in profits from lower energy prices and a potential global recession could potentially have an impact beyond first half earnings. The 29-member STOXX Europe 600 Utilities Index has dropped 22% since the start of February, compared with a 26% drop in the main STOXX 600 Index.

Analysts at Joh Berenberg Gossler & Co. cut its 2020 European price forecast by 11%, in part due to an expected 5% drop in industrial power demand from Covid-19. Italy, Spain, Germany, France and the U.K. have all experienced or are expecting a slide in consumption as offices and schools shut and people stay at home. If more factories shut too, the impact will be even worse.

RWE said that so far it is very difficult to forecast how a prolonged slump in demand would impact operations at its plants, which range from nuclear to coal, natural gas and wind. Most of its output is still from fossil fuels, which is behind renewables in priority for supplying the grid.

The company is “doing all we can to maintain power production in our plants and thus contribute to security of supply,” RWE said. “We expect an impact on electricity demand given the current economic development and shut down of industrial activity. However, this should be temporary and bounce back once we have come through the crisis.”

If the drops in demand continue, or are sustained or increased, weekday power demand would most likely fall to Sunday levels –- a reduction of as much as 26%, depending on the country, according to BloombergNEF. This could translate into a big drop in power prices too.

“We expect power demand to decline by 5%-7% this year on 2019 and power prices to be down 20% in 2021 from our previous assumptions,” said S&P Global Ratings credit analyst Pierre Georges. This will affect earnings on generation and supply activities, he said.

RBC Europe Ltd. is keeping an eye on its power-price forecasts but haven’t made any adjustment yet because most generators have hedged their positions for this year. If lockdown measures continue after the summer the impact could be long term, the company said.

Benchmark year-ahead power in Germany has dropped 14% since the start of last month to the lowest in almost two years and a long-term decline will impact earnings. RBC estimated that price swings impact about 20% of Ebitda in Europe’s utility sector.

While industries including transportation takes an immediate hit as people stop traveling, it takes government measures shutting down schools and offices to impact power and natural gas consumption. The coming weeks will be key in determining whether the impacts of the virus are short-term or longer-term, according to one veteran Swiss trader.

Demand “could potentially dissipate in a few weeks or months. What we have yet to see is whether these disruptions are large enough to push the world into a more meaningful recession,” said Domenico De Luca, Head of trading and sales at Axpo Holding AG. “If so, energy demand could remain subdued.”