Governor Stephen Poloz is poised for a dramatic farewell at the Bank of Canada before his departure in June.

The central banker and his governing council decide Wednesday whether a cut to interest rates is warranted amid mounting concern about the global spread of the coronavirus. Canada’s already fragile economy essentially stalled in the final quarter of last year, and the virus adds to a growing list of impediments that could push Poloz into his first reduction of borrowing costs since mid-2015.

Canada -- unlike its Group of Seven peers -- has resisted the worldwide trend to easier monetary policy, but that resistance looks to be fading fast. Bets on a cut this week spiked as the economic fallout from the virus widened and stocks slumped.

The U.S. Federal Reserve and other central banks have now opened the door to further easing, and the Bank of Canada could decide to lead the charge. Economists at Goldman Sachs Inc. said Sunday a co-ordinated global monetary response might be in order.

“With markets extrapolating what looked like a modest hit to global growth from the coronavirus into a full-fledged economic downturn, the bank is likely to want to lean against any deterioration in confidence,” Dawn Desjardins, deputy chief economist at Royal Bank of Canada, said in a note to clients Friday. “There is even the possibility of a coordinated central bank easing in the days ahead.” 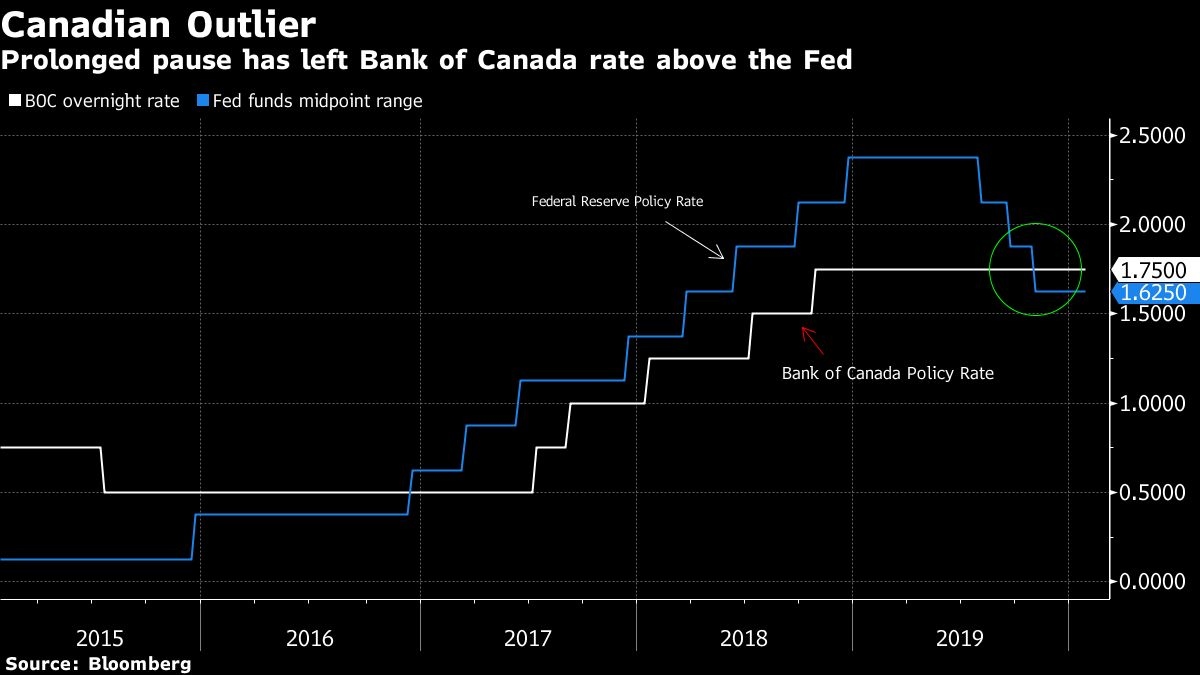 Investors are placing 80 per cent odds of a cut on Wednesday, in a decision due at 10 a.m. in Ottawa. That’s a sudden change from a week ago when markets were placing just a 20 per cent bet on Poloz easing, and economists have been slower to adjust their predictions.

All but nine of 26 respondents in a Bloomberg economist survey predict the bank will hold rates steady this week. However, some shops including Royal Bank and National Bank Financial flipped their forecasts to a cut late last week, and others may follow. Futures markets are now pricing in two rate cuts spread over the final three decisions of Poloz’s tenure.

The Bank of Canada has kept its benchmark rate at 1.75 per cent for ten consecutive meetings, leaving the country with the tightest monetary policy among advanced economies. Poloz seemed comfortable with a wait-and-see stance throughout 2019, largely due to a robust labor market and inflation near target. However, communications shifted in January to a more dovish stance as incoming data pointed to softer conditions.

Now risks are piling up. The weakened Canadian economy must contend not only with the coronavirus, but also multiple pipeline protests that had ground rail transport to a halt, neither of which have been accounted for in the data. Analysts have already begun to lower growth expectations for 2020.

For Poloz, whose commitment to data dependency has become a hallmark of his tenure, a decision to cut rates this week would mean acting before multiple risks materialize. Still, getting ahead of impending economic shocks isn’t out of character.

In his first policy move, Poloz unexpectedly cut rates in January 2015 to counter the impact of collapsing oil prices. And in last October’s rate decision, it was revealed governing council discussed and subsequently dismissed the need for an insurance cut that would get ahead of the impacts of rising trade tensions.

One reason policy makers may forgo a cut Wednesday is that the decision comes without the broader analysis included in a Monetary Policy Report. The central bank under Poloz has only moved the interest rate once in a non-MPR meeting, in September 2017.

Still, Poloz is due to speak on Thursday at 1 p.m. in Toronto, and could take the opportunity to elaborate on the central bank’s thinking.