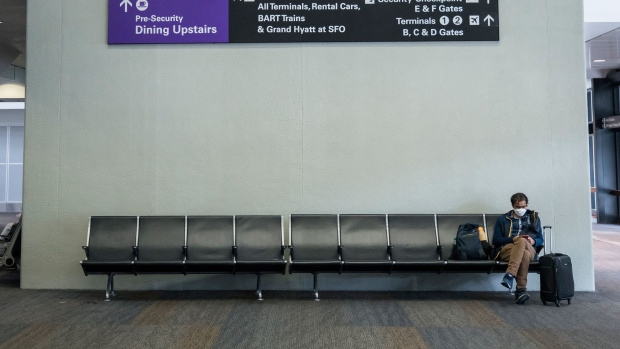 A person wearing a protective face mask sits in the departures check-in area at San Francisco International Airport in San Francisco, California, U.S., on Thursday, March. 5, 2020. The novel coronavirus outbreak will cost the airline industry $63 billion to $113 billion in lost revenue from passengers this year, the International Air Transport Association said as it revised an estimate for a $30 billion loss made just two weeks ago. Photographer: David Paul Morris/Bloomberg , Bloomberg

“I don’t think we’re ever going to lose money again,” Parker said during an investor gathering at Dallas-Fort Worth International Airport. “We have an industry that’s going to be profitable in good and bad times.” His counterpart at Delta Air Lines Inc., Ed Bastian, expressed similar optimism.

Airlines, like most major companies, game out extreme financial shocks so they can be prepared for the worst. A few years after Parker’s comment, the industry is beginning to test the accuracy of those drills against the coronavirus epidemic, one of the “black swans” that figure in their wargaming, along with terrorist attacks and regional conflicts.

What U.S. carriers first saw as largely Asia’s problem has quickly spread to America. Faulty virus tests and weeks of delay by the Centers for Disease Control & Prevention have left Americans uncertain as to the pathogen’s scope. Now they are starting to shun domestic air travel because planes, deservedly or not, have become medically suspect.

United Airlines Holdings Inc. and JetBlue Airways Corp. last week announced capacity reductions given the demand falloff, while Southwest Airlines Co. said virus fears will slash first-quarter revenue by as much as $300 million, and that it will probably have to suspend some flights.

It’s expected that other U.S. carriers will cut flight schedules and adopt cash-saving measures if people continue to stay grounded. Many airlines are also waiving change fees for tickets purchased this month, hoping to entice buyers to pick up some of the slack.

Airlines are bearing the brunt of a Sept. 11-style customer panic, Southwest Chief Executive Officer Gary Kelly said, calling it a “gut punch” to the industry. The deepest blow has come from business travelers, with many companies prohibiting travel while conferences and trade shows are canceled or postponed. Corporate demand will contract by 30% in March and April, Cowen & Co. analysts forecast.

Covid-19 fears have also begun to appear in airport hotel occupancy data, with an almost 4% decline the week of Feb. 24-March 2, lodging research firm STR said. The largest declines were at airports with the biggest volume of international traffic, such as Chicago, New York and San Francisco.

“The million dollar question,” Cowen analyst Helane Becker wrote in a March 6 client note, “is when will travel trends return to normal?”

With Asia carriers already in trouble following the Wuhan, China, outbreak, last week seemed like Europe’s turn. The U.K.’s largest regional airline was put under administration while Deutsche Lufthansa AG said it was prepared to cut as much as 50% of its capacity, and on Sunday began seeking government support. Norwegian Air Shuttle ASA cut flights and Italy’s Alitalia SpA, already in creditor protection, faces spiking infection rates at home.

But against this growing demand shock, there is some good news for the U.S. airline industry. Since the financial crisis more than a decade ago, the industry has been deeply transformed: Executives have built up their defenses with strong balance sheets, reorganized business models and new tools to help ride out tough times.

These measures include a broad industry shift from aircraft leasing to ownership, which limits rent payments and makes it easier to park unneeded planes; billions of dollars in reserves; more valuable loyalty programs to generate larger amounts of cash; and the ability to borrow at cheaper terms owing to robust balance sheets and low interest rates. The airlines have also become much more sophisticated about revenue-management, with precise forecasts and data about customer behavior. And plummeting oil prices are certainly welcome, too.

“In terms of survival, I don’t think there’s a threat,” said Samuel Engel, head of the aviation group at consultant ICF. “In terms of a risk to profits, it’s hard for me to imagine that there wouldn’t be.”

Nevertheless, carrier resilience is likely to be tested far more in the second quarter than the first, given that January and February were mostly routine business months, said Vicki Bryan, a veteran credit analyst who runs Bond Angle LLC. One unknown is how much the virus will spread in the U.S., and if it forces authorities to close airports, schools and other public venues, Bryan said.

“If this thing blows up out of control, that’s where you go from underperforming to losing money,” she said.

“The real question is how the fall-off of demand aligns with the flexibility in their fleet.”

Cash is of course the ultimate buffer in lean times, and the airlines have stashed a lot of it away.

Low-cost airlines have 16%-28% of their annual revenues in cash while larger, full-service carriers average below 10%, said George Ferguson, a senior analyst with Bloomberg Intelligence. At the end of 2019, American had $7 billion while United had $4.9 billion and Delta $2.9 billion.

Airlines have been quick to highlight the size of these cash piles. “Our fortress balance sheet remains a key competitive strength,” Alaska Air Group Inc. said Friday in an investor update. The carrier said it had $4.5 billion, including 133 planes in its fleet against which it could borrow, if necessary.

The industry likely has adequate liquidity to carry it through the coronavirus crisis until May, Ferguson said. If the peak summer travel season appears threatened, however, airlines will adopt more drastic measures to chop expenses.

Last month, American raised $500 million from five-year bonds to help fund its employee pensions. Delta is mulling early retirement for its McDonnell Douglas MD-88 and MD-90 aircraft, which are about 10% of its mainline single-aisle fleet. Spirit Airlines Inc. meanwhile has as much as $800 million in Airbus SE aircraft and jet engines that it could borrow against.

As ticket sales continue to dwindle while fixed costs remain, airlines will likely reexamine which aircraft can be grounded.

Leased aircraft are the hardest to park, given their rent expense, as “leasing companies expect you to pay every month regardless of who is sick,” said Engel of ICF. But U.S. carriers have been favoring ownership in recent years. The three biggest airlines lease only 34 of the 494 wide-body jets in their fleets, according to ICF data.

“The real question is how the fall-off of demand aligns with the flexibility in their fleet,” he said.

To contact the author of this story: Justin Bachman in Dallas at jbachman2@bloomberg.net