After weeks of wondering how corporate Canada fared in the early days of the COVID-19 pandemic, investors finally got a proper look under the hood.

Senior executives spoke about the impact. Some described the future as too hard to predict. Others tried to identify parallels and differences with the financial crisis.

By withdrawing their 2020 forecasts, many Canadian companies have expressed their lack of confidence about when the economy will reopen and how consumers will behave when it does. Profit expectations have slumped to levels unseen in four years, according to data compiled by Bloomberg.

Even so, stocks continued to rally. The S&P/TSX Composite Index rose every day last week and has gone up seven weeks in a row, its longest winning streak in 14 months. 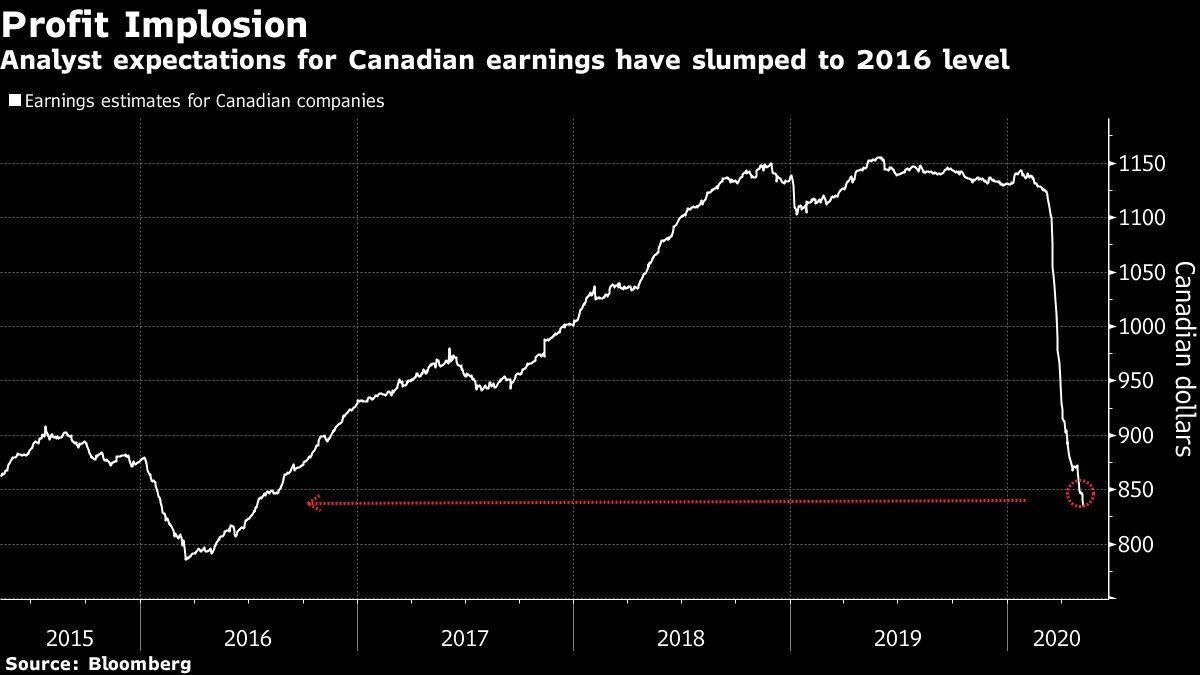 With more than 65 per cent of companies in the index having reported quarterly results over the past three weeks, here’s a look at some of the numbers and the future state.

A is for Airlines

Air Canada was the single best performing company in the index for the decade that ended Dec. 31, 2019. Now it has one of the bleakest outlooks. The airline expects the impact of the virus to last for at least three years and predicted large job cuts as it hunkers down to survive “the darkest period ever” for the industry. Air Canada is down 65 per cent this year.

It declined to give an update on its planned purchase of smaller rival Transat A.T. Inc. until its gets regulatory approval. But the market has a view: Transat shares ended the week at $8.30, far below the $18 takeover price.

One company’s sorrow is another’s hope. With fewer commercial airplanes carrying cargo and more consumers shopping online, Cargojet Inc. experienced a surge in volumes for all of its segments. First quarter adjusted Ebitda jumped about 25 per cent to $40.2 million  and revenues went up 11 per cent to $123 million. Its shares are up 35 per cent this year. 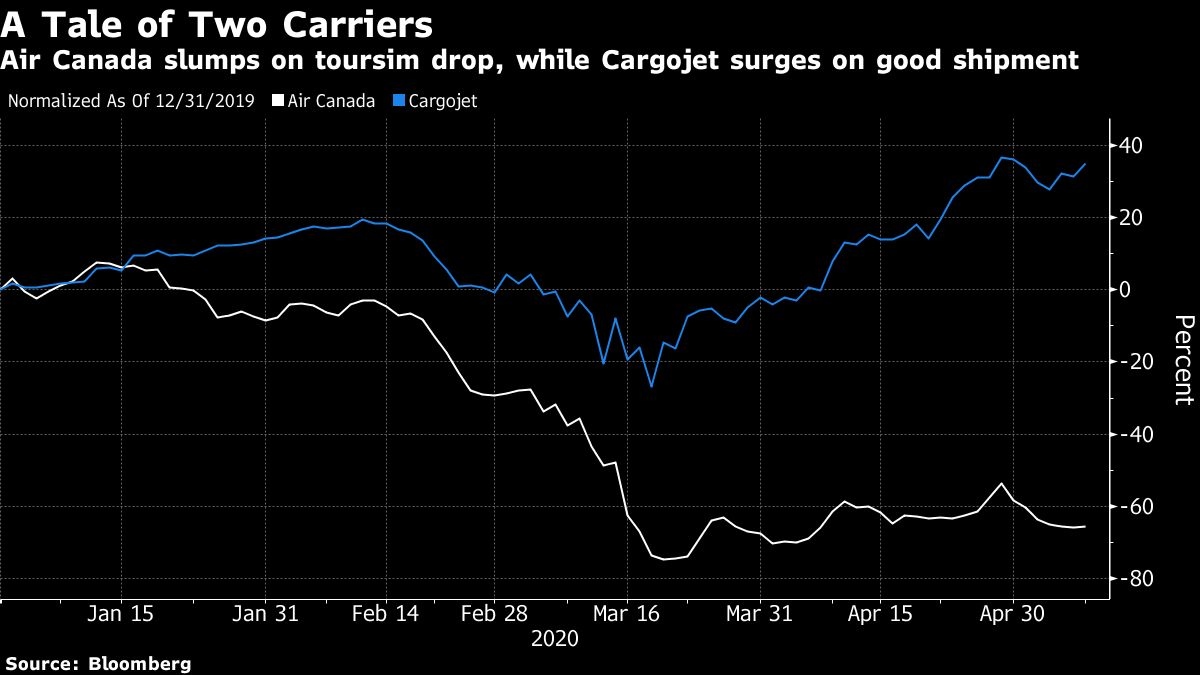 Agnico Eagle Mines Ltd. Chief Executive Officer Sean Boyd wants to direct much of the cash flow windfall to shareholders, even as the industry faces temporary production cutbacks due to the spread of the coronavirus. Amid the suspension of mine operations at most sites, Boyd noted, “In my 35 years, this is the busiest seven or eight weeks I’ve ever had.”

Prices rallied 6.9 per cent in April (after a three per cent surge last quarter), trading as high as US$1,747.36 per ounce. Investors like gold as a hedge against negative bond yields. 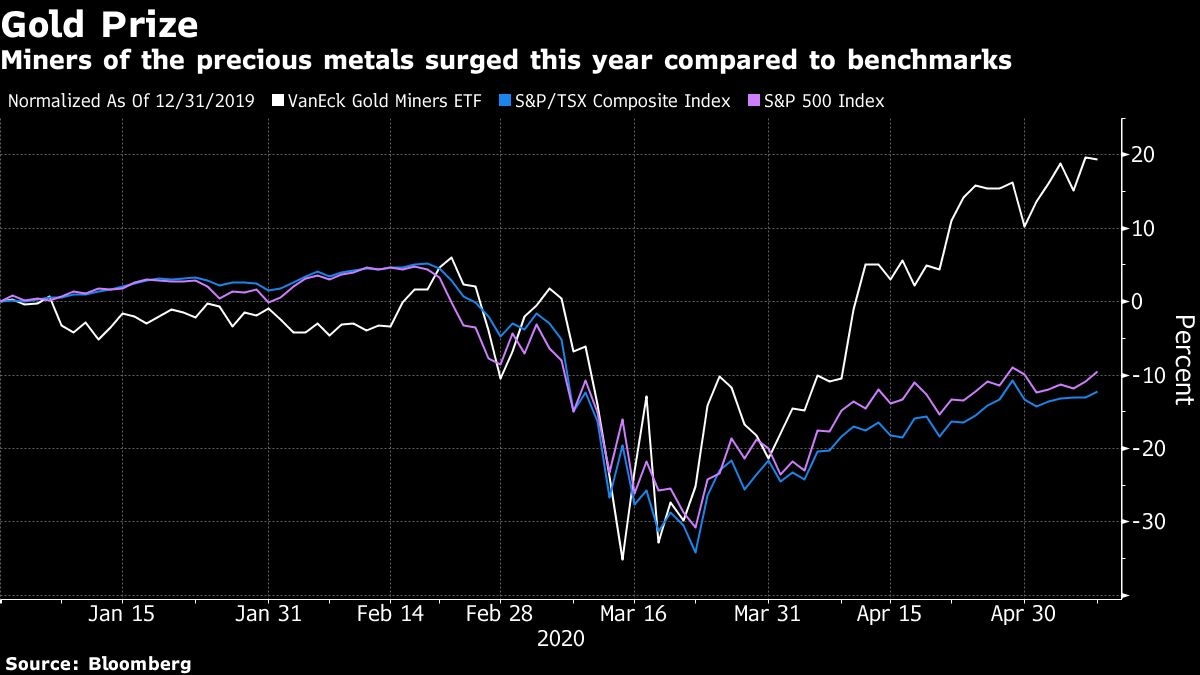 The world’s second-largest gold miner said the coronavirus outbreak has had little impact on its output. Barrick Gold Corp. CEO Mark Bristow said it was able to stockpile inventories of consumables and managed to shift orders for some key goods from country to country as the virus spread. “Our supply chains are fully open,” Bristow said in a May 6 interview with Bloomberg.

From T-Shirts to Masks

Like many companies around the globe, Gildan Activewear Inc. pivoted to making hard-to-find personal protective equipment and is now considering making the temporary business permanent.

Gildan, which makes T-shirts, underwear and other basic garments, said April 8 it would start producing non-medical face masks and isolation gowns at its idle Honduras factories after getting hit hard by the virus crisis. First-quarter sales dropped 26 per cent and Gildan predicted a “significant earnings loss” for the current quarter.

Shopify Inc. had a blowout first quarter, with revenues that topped analyst estimates as it helped bring more businesses online. That briefly made the company the most valuable firm on the Canadian stock market, moving past Royal Bank of Canada on Wednesday.

Then the software company announced a share sale to raise US$1.3 billion to strengthen its balance sheet and fund growth. That cooled off the stock, which fell 4.4 per cent over Thursday and Friday. The company also announced a partnership with Pinterest, with merchants able to tap into 350 million Pinterest users.

Retail giant Canadian Tire Corp. reported a net loss in the first quarter as comparable store sales at Canadian Tire outlets grew a mere 0.7 per cent and revenue at its SportChek banner declined. It withdrew its three-year financial “aspirations” forecast due to the uncertainty and severity of the health crisis.

The venerable Canadian retailer did get on the e-commerce bandwagon with digital sales rising 44% in the three months.

As we wait to hear from Canada’s Big Six banks, which make up about 19 per cent of the TSX Composite, insurers have already started to report.

Sun Life Financial Inc. had a 7.4 per cent increase in underlying earnings that topped analysts’ estimates. Still, it saw its biggest drop in net income since 2017, with a 37 per cent decline that CEO Dean Connor attributed to market declines brought on by the pandemic.

One silver lining: Connor expects more takeover opportunities to arise because of the coronavirus pandemic. Sun Life will use extra stress-test criteria to evaluate any potential takeovers, beyond what it would have used during normal times, he said.

Manulife Financial Corp. CEO Roy Gori sees a tougher road ahead. The insurer posted its biggest drop in earnings in more than seven years and the second quarter “will be perhaps more challenging than even Q1, and the operating and macroeconomic environments are obviously incredibly challenging and difficult to predict,” Gori said in an interview.

On REITs and Rents

Skipped rents and deferrals have taken a toll on Canada’s real estate sector.

RioCan Real Estate Investment Trust is freezing new and early stage projects to cut costs during the coronavirus pandemic as more tenants failed to pay their April rent. The Toronto-based REIT said it collected 55 per cent of its rent during the month. The company expects 28 per cent to still be received and has agreed to deferrals for 17 per cent of its tenants. RioCan withdrew its guidance last month.

Canadian energy companies are in cash-preservation mode, announcing plans to cut as much as $11.4 billion in capital spending, with Suncor Energy Inc. and Canadian Natural Resources Ltd. each disclosing their second rounds of reductions last week.

Canadian Natural surprised the market by maintaining its quarterly dividend of 42.5 Canadian cents a share after Suncor slashed its payout by 55 per cent.