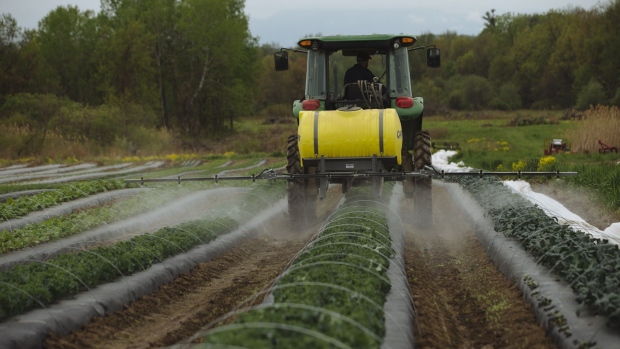 A worker rides a tractor while spraying organic pesticide on crops at a farm in Hudson, New York, U.S, New York, U.S., on Monday, May 18, 2020. Livestock ranchers and produce growers are fighting for survival as they compete with other industries for billions of dollars in relief in what could be the last massive economic stimulus package lawmakers move this year. , Bloomberg

“We’re going to invest significantly in our own capabilities, our own pipeline, our own innovation, but we’re always looking at whether we should build it or buy it,” Magro said Thursday in an interview.

“We have the capability as an organization to look around the world and to ensure that we’re making the best decision in terms of allocation of capital,” he said.

Magro’s comments come after the company last month agreed to buy biologicals firm Stoller Group for $1.2 billion. In September, Corteva took over Spanish microbiological technologies firm Symborg. Deal making is heating up across the industry for alternative crop protection. Rival FMC Corp. agreed to acquire pheromone pioneer BioPhero ApS for about $200 million in June. The space is coming into the spotlight with farmers increasingly under pressure to adopt environmentally friendly practices.

Biologicals use material that already exist in nature to replace synthetic ingredients in chemical pesticides. Pest and crop diseases are growing more resistant to synthetic chemicals. Corteva expects the biologicals market to represent about 25% of the overall crop protection market by 2035.

Corteva is also focusing on global food security, climate change and the energy transition, Magro said in the Thursday interview. The company has a goal of increasing its current 7% of revenue dedicated to research and development to 8% by 2025. The company reported net sales of $15.65 billion in 2021. Earlier this year, Corteva announced it would spend $400 million restructuring to refocus the company.