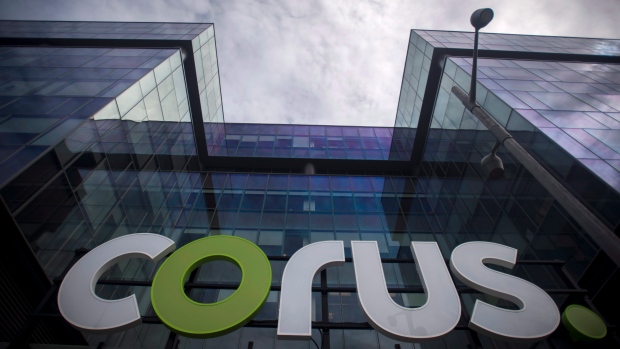 The new Corus logo at Corus Quay in Toronto is photographed on Friday, June 22, 2018. , THE CANADIAN PRESS/ Tijana Martin

TORONTO -- Corus Entertainment continued to suffer from the economic effects of COVID-19 during June, July and August but the pandemic had an uneven impact on different parts of its business during the quarter, its chief executive said Thursday.

"TV is on their way back already, but radio is a different story," Douglas Murphy told analysts.

The media company earned $30.3 million or 15 cents per diluted share for the fiscal fourth quarter ended Aug. 31, including $4 million of integration and restructuring costs.

That compared with a profit of $22.9 million or 11 cents per diluted share a year ago, when the quarter included slightly higher integration and restructuring costs and a $16.7 million writedown of the value of some TV brands.

Corus Entertainment revenue totalled $318.4 million, down from $377.5 million, as the disruptions caused by the COVID-19 pandemic depressed advertising revenue -- especially in radio.

The television segment, which includes the Nelvana animation and merchandising business and Corus Studios, saw revenue fall to $299.1 million from nearly $343.8 million.

The Corus radio segment, which owns 39 stations that sell advertising time, saw revenue drop 43 per cent from a year earlier to $19.3 million from $33.7 million.

"Advertising revenues continued to be significantly impacted by market-wide contraction of demand from COVID-19 restrictions resulting in outright cancellations or campaign deferrals in all markets," the company said.

Murphy told analysts on a conference call that the radio business will take longer to recover than TV because of a heavy dependence on advertising from local businesses that continue to struggle.

"So I do think that radio is very much sort of anchored in the pandemic and the work that the federal government is doing to try to support small business is essential there," Murphy said.

Television revenue was down due to 25 per cent less advertising compared with last year, while subscriber fees were down marginally and revenue from merchandising and distribution increased.

Murphy said some of the pandemic's effects actually helped parts of the Corus television segment, which includes program creation.

"As a content creator, through Nelvana and Corus Studios, we are already benefiting from the insatiable global demand for premium video content," Murphy said.

Industrywide, there have been several factors that are pushing up demand for content -- among them, a proliferation of streaming video services  and increased viewing time during the pandemic's closures.