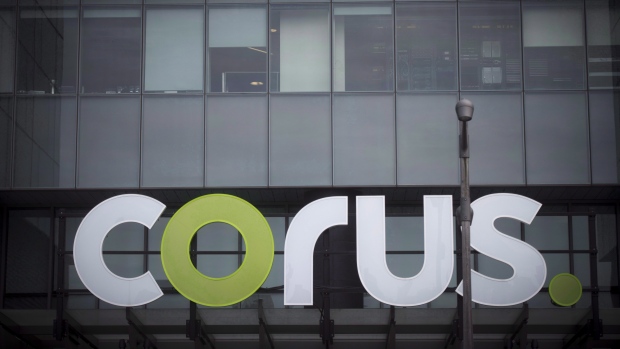 The Corus logo at Corus Quay in Toronto is shown on Friday, June 22, 2018. , THE CANADIAN PRESS/ Tijana Martin

TORONTO - Corus Entertainment Inc. (CJRb.TO) had a $66.4-million net profit attributable to shareholders in its latest quarter, as an increase in television advertising helped to boost revenue.

The owner of the Global television network, specialty TV channels, radio stations and content studios said the profit amounted to 31 cents per diluted share for the quarter ended May 31.

A “bunch of things” contributed to the TV ad growth, Murphy said in an interview following the call.

Audiences have stabilized overall and its big networks, including Global, have seen “modest” audience growth, he said.

Additionally, Corus has been successfully using audience data collected from set-top boxes to direct advertisers to specific TV programs, rather than to programs with the top overall audiences.

This type of “audience segment selling” now accounts for about 15 per cent of the Corus TV business, he said.

A third factor helping Corus has been a general swing back to television advertising after years of losses to digital media.

A fourth factor, he said, is that there's a new crop of advertisers that originated as direct-to-consumer sellers in the digital world - companies such as Amazon, Google, Trivago, Warby Parker and Skip The Dishes.

“These are all businesses that are getting big enough to spend on television.”

Corus is also finding new ways to distribute its TV programming, which historically has been delivered by the cable and phone companies over their landlines.

In a collaboration with Amazon, for instance, Corus has recently launched Stack TV - a collection of live and on-demand programming from Corus that's delivered through the American technology company's streaming platform.

“It's simply a new entrant in the distribution business for Canada and we're thrilled to be part of it.”

The Toronto-based company's first quarter profit this year compared with a net loss attributable to shareholders of $935.9 million or $4.49 per diluted share in the same quarter last year when Corus took a $1.01 billion one-time charge.

Analysts on average had expected a profit of 33 cents per share and revenue of $452.4 million, according to Thomson Reuters Eikon.