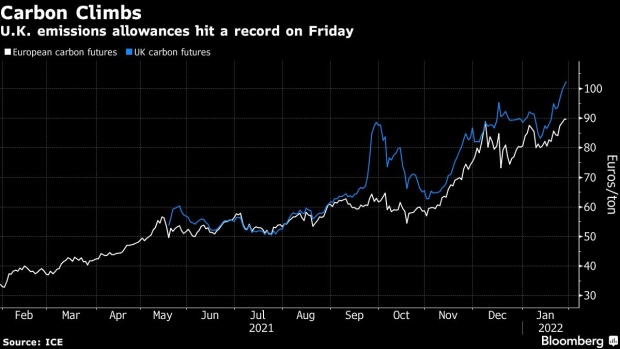 (Bloomberg) -- The price of polluting across Europe is rising as traders bet generators will keep burning coal instead of expensive natural gas.

European Union benchmark carbon futures are up almost 6% this week, the biggest weekly gain since early January. Even with a slight dip on Friday, it now costs close to $100 for businesses in the region to put a metric ton of carbon dioxide into the atmosphere.

The price has been bolstered by rising costs for gas, which make it more profitable for generators to burn dirtier coal to produce power. That means demand for emissions allowances increases, tightening a market where supply is carefully controlled by the authorities.

The market is “very sensitive right now,” with fears of a Russian invasion of Ukraine buoying gas prices even as a mild European winter keeps a lid on consumption, said Marcus Ferdinand, a manager focusing on power and emissions in Europe at Thema Consulting Group. Yet a war in Ukraine could also cut Europe off from a key supply of coal, he said.

In the U.K., emission permits rose to a record 85.25 pounds a ton on Friday, equivalent to more than 100 euros. The price has been boosted by a government decision not to intervene to contain the rally.

The options for traders to bet on carbon are also growing. On Monday, the Intercontinental Exchange will launch a contract based on its Global Carbon Futures Index, offering a way to access and hedge a global price for carbon by aggregating British, European, Californian and eastern U.S. CO2 costs. The price of the index has more than doubled in the past year.

Power prices also climbed on Friday, with German and French year-ahead contracts extending gains into a ninth day. German electricity for next year rose as much as 2.5% to 145 euros a megawatt-hour, while French power advanced as much as 2.2% to 155.05 euros.