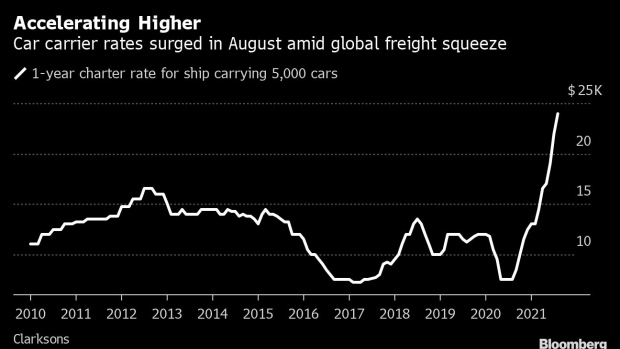 (Bloomberg) -- The cost of moving cars across the ocean is surging.

Vessels that carry autos and industrial machinery fetched their highest rates since 2008 in August, according to Clarksons Research Services. Stretched global supply chains and a worldwide recovery in car sales during 2021 have contributed to a surge in rates, according to Torbjorn Wist, chief financial officer at Oslo-listed car carrier Wallenius Wilhelmsen ASA.

The crunch has echoes of the container shipping market -- where soaring rates are raising the cost of hauling everything from bicycles to children’s toys to coffee. At least one car-carrying ship has been booked for three years at a cost of $30,000 a day, according to Pareto Securities AS. That level is more than triple the five-year average rate for hiring a ship for 12 months, and could be a sign that the boom in earnings is set to continue.

“We believe the capacity strain will continue for now,” Wist said.