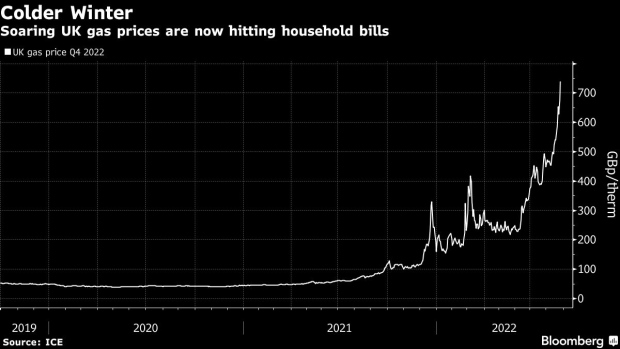 Electricity transmission towers near residential houses with lights on in Upminster, UK, on Monday, July 4, 2022. The UK is set to water down one of its key climate change policies as it battles soaring energy prices that have contributed to a cost-of-living crisis for millions of consumers. Photographer: Chris Ratcliffe/Bloomberg , Bloomberg

(Bloomberg) -- UK households will pay almost triple the price to heat their homes this winter compared with a year ago, a jarring increase for millions of people already struggling to afford everyday essentials.

Industry regulator Ofgem raised its cap on domestic energy bills to a record £3,549 ($4,189) beginning Oct. 1. That amount is expected to go even higher in January as the UK competes with other nations for limited gas supplies.

“Come October, low-income households will simply not turn on their heating,” said Peter Smith, director of policy and advocacy for the National Energy Action charity. “An increase of this much cannot be budgeted for by households with no wiggle room.”

The higher cap, which was in line with analyst estimates, escalates the economic pressures on Britons paying increasingly more for everything from food to furniture. UK inflation hit a 40-year high last month, and Citigroup Inc. said it could surge past 18% in January.

The government announced a £15 billion package of support in May, including £400 credits to all households and more for the poorest, but calls for further help remain unanswered during the Conservative Party’s ongoing leadership election.

Liz Truss, front-runner in the race, wrote in the Daily Mail that she would use an emergency budget next month to “ensure support is on its way,” but insisted it was not “right” to announce the full plan before the leadership contest was over or before she’d seen the full analysis from Whitehall.

“I know the energy price cap announcement this morning will cause stress and anxiety for many people,” Chancellor of the Exchequer Nadhim Zahawi said. “While Putin is driving up energy prices in revenge for our support of Ukraine’s brave struggle for freedom, I am working flat-out to develop options for further support.”

Zahawi held a meeting with energy companies this week, in which he asked them to do more to support their customers, rather than “relying on customers changing their behaviour or expecting government alone to help consumers,” according to a readout from the Treasury released Friday afternoon.

Some energy suppliers are calling for a £100 billion fund to help stabilize prices and a rapid effort to insulate more homes, but a government spokesperson has said no major policy decisions will be taken until a new prime minister is installed Sept. 5.

“It’s going to be horrendous,” said Bill Bullen, chief executive officer of Utilita Energy Ltd., which supplies 810,000 homes in the UK. “If any government doesn’t address this problem, they won’t be a government for very long,” he said on Bloomberg Radio.

The new cap -- a 178% increase on last winter’s level and 80% up from April -- regulates how much suppliers can charge households per unit of energy and applies to about 24 million customers on variable tariffs.

Annual bills for a normal household could reach £5,405 in January after the next adjustment and as high as £7,263 in April, according to consultants Auxilione. However, the cap -- which is based on volatile market prices -- is hard to predict until closer to the adjustment times.

QuickTake explainer: What’s the UK Energy Price Cap and Why Is It Rising?

More than half of UK households risk being pushed into energy poverty this winter by eye-watering bills. Based on new unit rates, the cost of running a typical cycle on a normal dishwasher will go from about 40 pence last winter to over a pound, while the cost of a tumble-dryer cycle will jump from 80p to £2.

Gyrations on wholesale markets are the most important components for setting the level of the cap. While renewable sources have been accounting for a rising proportion of the UK’s electricity supply, it’s still gas that is the main driver of the overall price, and most UK homes get their heat from the fuel.

“It’s clear the new prime minister will need to act further to tackle the impact of the price rises that are coming in October and next year,” Jonathan Brearley, CEO of Ofgem, said in a statement. “The response will need to match the scale of the crisis we have before us.”

Last winter’s cap was £1,277, but that was before Europe became hostage to the worst energy supply crunch in decades following Russia’s invasion of Ukraine. The continent is dependent on gas from Russia, and Moscow is curbing deliveries in apparent retaliation for European Union sanctions.

Ofgem’s announcement will “force many to make unthinkable choices this winter,” Labour Party Shadow Chancellor Rachel Reeves said in a statement. She pointed to Labour’s £29 billion plan to freeze bills this winter, funded in part by expanding a windfall tax on oil and gas companies.

Wholesale energy prices have soared to a level more than 10 times higher than their seasonal average for the past five years, and with the war in Ukraine dragging on, the rally is likely to persist.