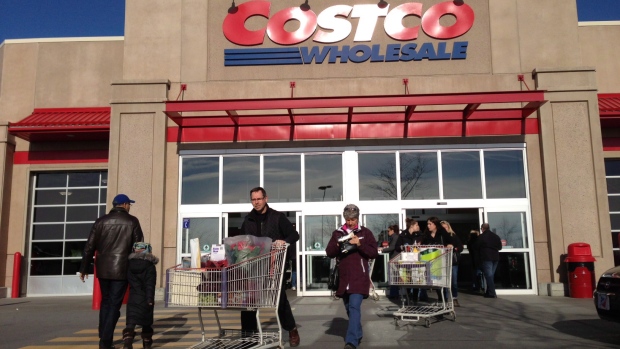 Customers walk out of Costco in Montreal , The Canadian Press

The company's shares fell about 4 per cent to US$170.80 in extended trading on Thursday.

Price war in the industry has intensified, with Wal-Mart Stores Inc reportedly running a new price-comparison test to knock out competition from grocery chains and big-box retailers.

The cut-throat competition has already hit supermarket operator Kroger Co, which reported its first decline in quarterly comparable sales in 13 years on Thursday.

Analysts on average were expecting 3.2 per cent growth, according to research firm Consensus Metrix.

Costco said it would raise annual fees in Canada and the U.S. by $5 to $60 for Goldstar and business members and by $10 to $120 for executive memberships from June 1.

The fee increases will impact around 35 million members, roughly half of them executive members, the company said.

Membership fees accounted for about 72 per cent of the Costco's operating income in 2016, according to the company's latest annual filing.

Analysts on average had estimated adjusted earnings of $1.36 per share and revenue of $29.86 billion in the quarter, according to Thomson Reuters I/B/E/S.

Costco performed well in the last two quarters, despite a tough environment for retailers, as it partly benefited from paying lower fees to credit card partner Visa Inc.

The company completed the switch to Visa from American Express Co during the fourth quarter last year.