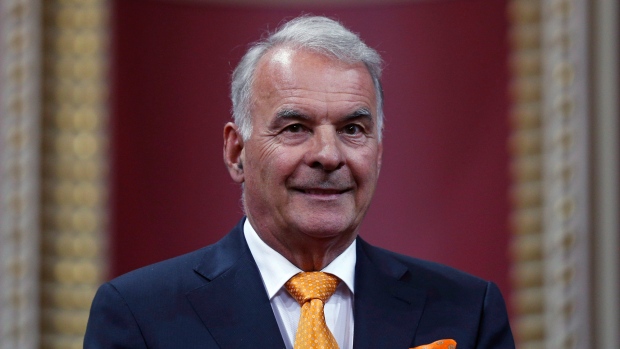 Alain Bouchard, founder of Alimentation Couche Tard, smiles while receiving the rank of Officer in the Ordre National du Quebec , The Canadian Press

The co-founder of Alimentation Couche-Tard (ATDb.TO) is plotting his course for further Asian expansion. In an interview on BNN, Alain Bouchard said he wants to put his own cash to work in the Far East to augment the company’s existing licensing strategy.

The Quebec-based convenience store giant currently licenses its Circle K banner in 13 countries worldwide, including China, Indonesia and the Philippines, all of which boast rapid economic growth and a growing middle class. In spite of his enthusiasm for the region, Bouchard said the company will not be hasty in its expansion in order to avoid costly missteps.

The company is going head-to-head with Japan’s Seven & i Holdings, which operates the 7-Eleven banner. The two heavyweights jockey for dominance in many markets, a competition which has grown more pitched as Couche-Tard has gone on an acquisition spree, including the US$3.8 billion deal for Texas-based CST brands in 2016.

Bouchard said he began to feel the itch for international expansion after the company started to grow outside of its Quebec home base.

“After we were across the country here, it was clear to me my next goal was the U.S. and eventually on other continents,” he said. “That’s just about what you know, and what you’re good at.”

In spite of boasting a worldwide network of nearly 12,100 stores stemming in part from six major acquisitions since 2004, Bouchard says there’s still work to be done in expanding the company.