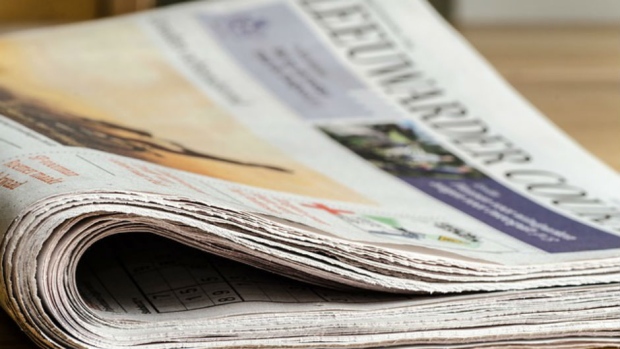 OTTAWA — The ongoing softwood dispute with the United States may not be hurting Canada much yet, but the industry is bracing for a new trade battle with the U.S. that could take a bite out of a part of the sector that is already facing sharp declines.

Derek Nighbor, chief executive of the Forest Products Association of Canada, says heading into the new year, the industry is waiting for the U.S. Department of Commerce to decide if it believes Canada is dumping newsprint into the U.S. at below market value.

"This is not something that people are talking about, but in our sector we are concerned this could be worse than softwood," Nighbor said.

The U.S. government has been investigating Canada's newsprint industry since the end of August, after Washington-based North Pacific Paper Co., complained Canada was dumping newsprint into the U.S. market and unfairly subsidizing its industry at home.

It is the same argument made by the U.S. Lumber Coalition about Canada's softwood industry, which led to the imposition of both countervailing and antidumping duties on most Canadian softwood exports to the United States.

The preliminary newsprint decision was initially due by Jan. 16 but has been postponed until March at the request of North Pacific Paper.

About 25 lumber mills in Canada would be hurt by duties, most of them in Ontario and Quebec.

U.S. Commerce says Canadian companies exported about $1.6 billion worth of newsprint to the United States in 2016. But Nighbor notes with the expansion of digital print, media newsprint sales are declining by about 10 per cent a year.

Still, he said, the industry will exist for many years and more than 1,000 small and mid-sized newspapers in the U.S. have asked their federal government not to institute duties because they can't sustain an increase in newsprint prices.

Newsprint would be the third Canadian wood product targeted by the Americans, after softwood and supercalendered paper. That paper — the glossy stuff used in magazines — was the first to be hit with duties.

Already Nighbor and the U.S. National Association of Homebuilders say the softwood duties are only hurting American consumers. Housing prices and materials to rebuild after Hurricanes Irma and Harvey in Florida and Texas have gone up in the last year.

Canada's low dollar relative to the U.S. and the high demand for softwood for building is helping Canada's industry withstand the hurt from the softwood duties and Nighbor says there is no indication any mills have closed or people been laid off here yet.

"The problem there is that if this thing drags out three or four years and markets soften," said Nighbor. "It remains a concern into 2018 but we're positioned better to this point than we thought otherwise."

Nighbor called the U.S. trade system "perverse" with its protectionist leanings and says the Washington company behind the newsprint complaint likely wouldn't even benefit from a cut to Canadian imports because it is on the West Coast and most of the Canadian business is destined for the Midwest and eastern U.S. markets.

"It's just a way to stick the finger in the eye of Canadians and it's something we weren't expecting to see," he said.

Canada and the United States continue to try to negotiate a trade settlement on softwood to replace the deal which expired in 2015. Canada is also seeking relief from the softwood duties in appeals through the North American Free Trade Agreement and the World Trade Organization.