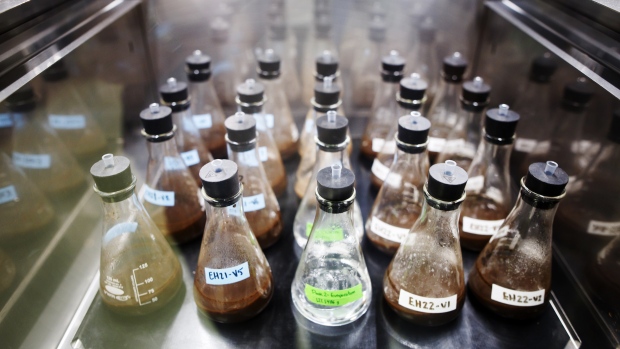 Flasks of hemp and enzymes are incubated at the Province Brands of Canada laboratory in Belleville, Ontario, Canada, on Friday, Aug. 31, 2018. , Bloomberg

People who drink alcohol typically learn the hard way how much is too much—usually in their teens or early 20s. As adults, they’re not interested in learning the same hard-knocks lesson about cannabis.

This is the challenge for an industry seeking to win over new or inexperienced users as legalization spreads through North America and around the world. It’s a particularly daunting one for makers of cannabis-infused beverages, which are keen to participate in a category that researcher Canaccord Genuity Group Inc. expects will be worth US$600 million in the U.S. by 2022.

That market potential has attracted several big alcohol companies that are seeking to offset declining beer consumption with the next big thing. The best-known partnership is Constellation Brands Inc.’s 38 per cent stake in Canopy Growth Corp. (WEED.TO), the largest cannabis firm by market value, for which it paid about US$4 billion. Budweiser brewer Anheuser-Busch InBev NV (BUD.N) formed a research partnership with Tilray Inc. (TLRY.O), with each company investing up to US$50 million in the venture, and Molson Coors Brewing Co. (TAP.N) has  teamed up with Quebec-based Hexo Corp (HEXO.TO).

All these companies are working to develop consumer-friendly cannabis drinks that can compete with alcohol but there’s one problem: Pot is nothing like booze.

Alcohol is water-soluble and cannabis is not, meaning alcohol is absorbed into the bloodstream quickly whereas pot edibles and beverages are metabolized much later in the digestive process. This leads to the classic edible effect, when inexperienced users consume a weed bonbon, feel nothing, have a second, and then find an hour later that they’re far higher than they wanted to be.

The problem of onset time (and the related problem of how long the effect takes to wear off) is one of the biggest challenges facing makers of cannabis beverages and may be one of the reasons the products currently make up a tiny portion of the overall legal pot market—less than 0.5 per cent of total U.S. sales, according to BDS Analytics.

Many in the industry believe that the key to mainstream acceptance is creating a “sessionable” beverage, where one can have two or three drinks over a few hours, perhaps with friends drinking alcohol, while enjoying a steady, moderate high.

“We think onset time is going to be one of the critical factors in the next stage of cannabis-infused beverages, and the investments being made by consumer-packaged goods companies and by big alcohol are going to dramatically move that needle,” says John Kagia, chief knowledge officer at New Frontier Data, a Washington-based cannabis research firm.

Making cannabis compounds water soluble so they act more like alcohol will be key to improving onset time, but most in the industry agree there is no technological magic bullet.

“The technical steps are half the battle, and then there’s who wants what, when, where, and why,” including decisions like bottles or cans, size, color, brand and taste, Linton says.

To solve the problem of onset time, many companies are experimenting with nano-emulsification, which uses a blending agent that attaches to the cannabis molecules, enabling them to better mix with water. Done correctly, the process should allow the active ingredients to evenly disperse in the beverage and absorb into the bloodstream much faster than if they’re digested.

This is the process used by Cannabiniers, a beverage, technology and brand management company that owns Nevada-based Two Roots Brewing Co., which makes non-alcoholic, cannabis-infused beer. Cannabiniers says it has achieved a 10-minute onset time with its products, and they wear off in about 90 minutes.

“We really do emulate the bell curve of consumption for traditional alcohol products in that we do have a rapid onset and quick offset,” says Kevin Love, vice president of market activations. “It takes a brave person to make that jump.”

Province Brands of Canada is taking a different approach—replacing barley and brewing beer directly from the stalks, stems and roots of the cannabis plant.

Trait Biosciences Inc., meanwhile, is using glycosylation, which mimics what the body does when it metabolizes cannabis by attaching a glucose molecule to the substance. This patent-pending technology, currently being tested on humans in clinical trials in Israel, improves onset time and avoids the “salad-dressing effect,” where the oily cannabis compounds separate from water, according to Ronan Levy, chief strategy officer at Trait. The company has also filed a patent for a second process that binds the cannabis compounds to water-soluble proteins rather than glucose molecules.

Levy is optimistic about the market potential for cannabis beverages but acknowledges it’s still early days for the industry. “There’s a strong sentiment that beverages are probably going to become the leading mechanism for ingestion,” Levy says. “They just haven’t yet because the truth is that most products out there are kind of terrible.”

The rigorous restrictions on pot research in the U.S. don’t help. Because the plant remains illegal at the federal level, researchers must apply to the Drug Enforcement Administration to get a license and then secure a legal supply, most of which comes from a 10-acre farm at the University of Mississippi. Even in Canada, which legalized recreational marijuana use in October, edibles and beverages won’t be available until later this year at the soonest.

“Given that cannabis has been illegal for much of the past century, you’re seeing the industry now making up for almost a century’s worth of innovation and investment in a two- to five-year period,” says Kagia at New Frontier Data. “We would argue that we’ve still barely scratched the tip of the iceberg around where product innovation in cannabis is going.”

“With the know-how that these companies have already in creating all kinds of beverages, I honestly have little doubt that these kind of products will be upon us and the onset effect will be resolved by the end of this year,” he says.