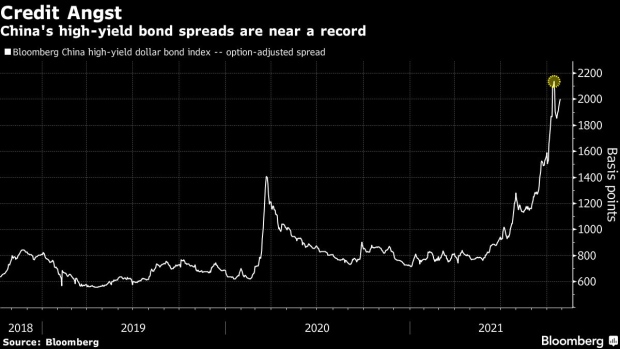 (Bloomberg) -- Focus is turning to whether China Evergrande Group will stave off default again this week, as creditors prepare to negotiate a debt restructuring that would rank among the largest ever in China.

The developer is due to pay a $45.17 million bond coupon originally due Sept. 29 by Friday, when a 30-day grace period expires. Evergrande last week avoided default on a larger interest payment by wiring the funds days before a Saturday deadline. It still has $19.2 billion in outstanding dollar bonds and more than $300 billion in liabilities.

Failure to pay may trigger cross defaults on some of the company’s notes. China has this week urged developers to make payments on their offshore bonds, and asked Evergrande’s billionaire founder Hui Ka Yan to tap his personal wealth to help solve the company’s deepening debt crisis.

Advisers representing Evergrande and a group of its offshore bondholders have signed non-disclosure agreements in preparation for potential talks, people familiar with the matter said. Creditors have been trying to engage with Evergrande since mid-September, sending letters asking for information about the company’s situation and seeking assurances that management won’t sell offshore assets while debt solutions are being discussed.

Kaisa Group Holdings Ltd. was downgraded two notches by S&P and Fitch to CCC+ from B on Wednesday, with both credit assessors warning about the Chinese developer’s ability to refinance dollar bonds maturing through 2022. Moody’s Investors Service last week cut the firm to B2 from B1.

Being bullish on Chinese financial markets is becoming the consensus. This month alone, brokerages including HSBC Holdings Plc, Nomura Holdings Inc. and UBS Group AG turned positive on Chinese stocks, citing reasons including cheap valuations and a receding fear of regulation from Beijing.

Asset managers BlackRock Inc. and Fidelity International Ltd. are buyers, while Morgan Stanley recommended owning the nation’s speculative-grade debt because prices had fallen too far. Betting on a strengthening yuan is a no-brainer to many currency analysts.

The ad hoc bondholder group’s advisers are seeking to exchange information with the company, including the status of various projects, liquidity and asset valuation, after earlier outreach attempts were rebuffed, said the people, who asked not to be identified because the talks are private.

Why China’s Developers Have So Much Dollar Debt

With concern about Evergrande rippling through markets, a look at why Chinese real estate firms are so indebted: developers’ debt has piled up, with annual dollar-bond sales surging from $675 million in 2009 to $64.7 billion in 2020, according to data compiled by Bloomberg.

A rapid expansion of China’s property sector led to large funding needs. In addition to bank loans, developers turned to the vast pool of money in the global dollar-bond market, which was hungry for higher yields.