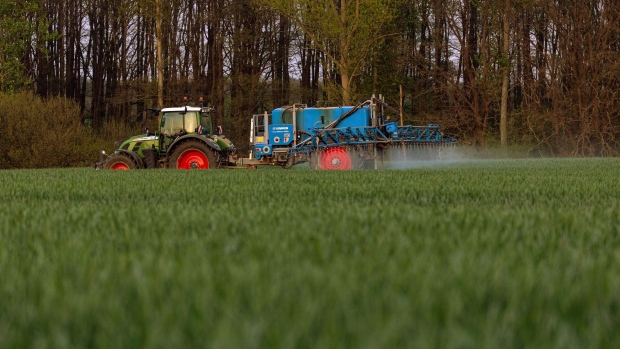 A tractor pulls a Lemken Gmbh Albatros trailed sprayer through a field of grain in Brandenburg, Germany, on Monday, May 2, 2022. Access to edible oils for making food, biofuels and personal care products is increasingly at risk as war in Ukraine and weather-driven supply woes crimps both supply and trade flow. Photographer: Krisztian Bocsi/Bloomberg , Bloomberg

(Bloomberg) -- Countries are redeveloping abandoned croplands at a rate that is jeopardizing the land’s contributions to reducing CO₂, according to a report published today in the journal Science Advances. The new study, drawn from analysis of satellite imagery dating back to the 1980s, should help policymakers better evaluate how their land-use practices help or inhibit efforts to reduce atmospheric carbon dioxide concentrations and restore ecosystems.

The researchers found that across 11 diverse sites around the world, 8.8 million hectares (33,823 square miles) of cropland were abandoned for five years or more between 1987 and 2017. When these areas are left alone, forests can regrow and ecosystems reconstitute themselves. But they need to be left alone, and by the end of that period, an average of 38% of the land re-entered cultivation at each of the 11 sites. The authors concluded that more than half of abandoned cropland is put back into use within 30 years. The average amount of time lands were abandoned was 14.2 years.

“This is a very important paper,” said J. Leighton Reid, an assistant professor of ecological restoration at Virginia Tech who was familiar with the study but not involved in it. “Political leaders leaders should take note here because many of them are narrowly focused on how many trees they can plant in the next few years. That number matters way less than the length of the time that those trees will persist as a forest.”

The sites under study stored an estimated 403 million tons of CO₂ — or 35% less than they might have taken up without recultivation.

Farmers leave cropland behind for many reasons, such as to pursue better economic opportunities in cities or because subsidies disappear, as they did when the Soviet Union collapsed in 1991. In other cases, new farming technology makes some areas less productive than they used to be.

The study identifies several sources of competition among potential uses for land. The need to leave land alone, to restore biodiversity and absorb carbon into new forest, may be more at odds with growing crops for energy production than is conventionally realized. Crops cultivated for bioenergy tend to be poor for biodiversity. Bioenergy advocates see abandoned lands as ideal for crop growth but, the paper points out, lands apparently doing “nothing” are doing something quite important by rebuilding ecosystems. The work follows a study in the same journal earlier this month that found that a large US investment in growing crops for use in energy production would run up against water stress that could strike a quarter of the country by 2100.

“A lot of ecosystems can recover, but it takes a long time,” said Christopher Crawford, the new study’s lead author and a PhD candidate at Princeton. “Obviously the first best solution is to not cut down a forest in the first place.”