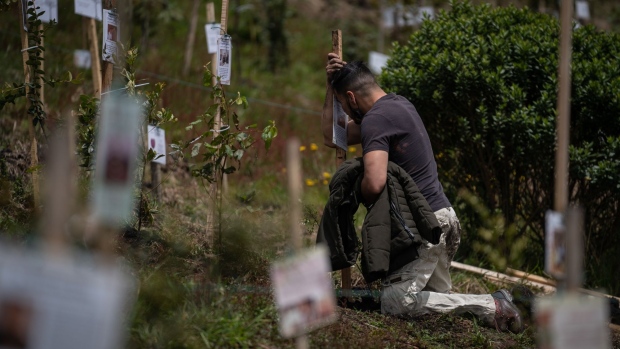 A mourner kneels in front of a tree planted with the ashes of a victim lost to Covid-19 at the Paramo de Guerrero nature preserve near Cogua, Colombia, on Sunday, June 27, 2021. Protest-wracked Colombia surpassed 104,000 deaths from Covid-19 as the government tries to balance reopening large swathes of the economy with protecting citizens from the pandemic. , Bloomberg

(Bloomberg) -- Growing concern that Covid-19 vaccines being deployed across much of the developing world aren’t capable of thwarting the delta variant is prompting some countries to look at offering third doses to bolster immunity against more-infectious virus strains.

Though definitive evidence is yet to emerge backing the need for so-called “booster” shots, health officials from Thailand to Bahrain and the United Arab Emirates have already decided to offer the extra doses to some people already inoculated with vaccines from Chinese makers Sinovac Biotech Ltd., Sinopharm and from AstraZeneca Plc.

Officials are being motivated by concerns that delta and other variants appear to be breaking down defenses of vaccines not made from the super-effective messenger RNA technology, or mRNA. In places like Mongolia and the U.A.E., high levels of coverage with Chinese shots using the older, less effective inactivated vaccine platform hasn’t stopped a surge in cases. In the Seychelles, five people fully vaccinated with AstraZeneca’s shot have died.

Research shows that the delta mutation is powerful enough to make even mRNA shots from BioNTech SE and Moderna Inc. less effective, bringing down protection to below 90%. The effectiveness of AstraZeneca’s viral vector vaccine against symptomatic infections caused by the variant was lower at 60%, a study showed, though it can still prevent more than 90% of hospitalizations.

Countries are hoping a booster -- either mRNA or a dose of another shot previously taken -- could bolster protection ahead of the return of colder weather that’s optimal for the virus’s spread. Unlike western developers, Sinovac and Sinopharm have shared little about how their vaccines could protect against variants. Shao Yiming, a researcher with the Chinese Center for Disease Control and Prevention, said in May that preliminary studies indicated Chinese vaccines were still protective against variants emerging from India, without elaborating.

The two inactivated vaccines produced by Sinopharm were 73% and 78% effective against symptomatic Covid in phase III trials. Various results from Sinovac’s clinical trials across Brazil, Indonesia and Turkey put efficacy at a wide range of 50% to over 80%, which has fueled uncertainty about how well it works.

“We recognize that the weaker vaccines in particular seem to lose their ability to protect against Covid-19 relatively quickly, particularly against the variant strains,” said Nikolai Petrovsky, a professor at the College of Medicine and Public Health at Australia’s Flinders University. “Even the better vaccines seem to be showing increasing levels of vaccine failure due to variant infections.”

From Alpha to Delta, Why Virus Mutations Cause Alarm: QuickTake

Yet any plans by wealthier nations to acquire additional shots stands to further strain global supply and exacerbate the inequality gap that has left poor countries with fewer inoculations. The World Health Organization has called on richer countries to share doses to help meet a goal of vaccinating at least 40% of every country’s population by the end of the year. Global deaths passed 4 million this week, as the disparity leaves poorer places exposed to outbreaks.

Giving extra doses “could easily divert one to two billion doses of vaccines over the coming 12 months to boost people already immunized that might otherwise go to developing countries where people have yet to receive their first immunization,” Petrovsky said.

The WHO has expressed caution in encouraging third doses. Chief scientist Soumya Swaminathan said in June that such a recommendation was unnecessary and premature given the paucity of data on booster shots and the fact that high-risk individuals in much of the world still haven’t been fully vaccinated.

But governments are racing ahead as the delta variant spreads to more than 100 countries after devastating India, where it was first identified. The concern is particularly acute in places which had earlier relied on Chinese vaccines, which are available in nearly 100 nations.

In the Middle East, some countries have already started offering booster shots -- including Pfizer and Sinopharm -- for people who completed their vaccinations months ago, mostly with Sinopharm.

Thailand plans to use vaccines from AstraZeneca and Pfizer as boosters for healthcare workers who earlier received Sinovac shots. The Indonesian Doctors Association this week also called for booster shots for health workers, after some medical staffers died despite being fully inoculated with Sinovac and AstraZeneca.

In Singapore -- which has indicated that it’s preparing to ensure booster shots can be administered as early as year-end should they be needed -- people inoculated with Sinovac aren’t being counted in the official vaccine tally, amid efficacy concerns and risk of vaccine breakthrough.

What’s the Best Covid Vaccine? Why It’s Not So Simple: QuickTake

Preliminary studies from Thailand show that a first dose of Sinovac followed by an AstraZeneca shot three to four weeks later can elicit a stronger immune response than two doses of the Sinovac vaccine.

Even China, which has fully immunized more than a third of its 1.4 billion people with homegrown vaccines, has a study underway to evaluate the benefit of booster shots. Sinovac CEO Yin Weidong has said a third shot of the company’s vaccine, given three to six months after full inoculation, could raise antibody levels by as much as 20 times.

China is currently reviewing the BioNTech vaccine for approval. A few options are being considered by officials, including using it a booster shot for people already fully inoculated with local vaccines, according to people familiar with the matter, asking not to be named as the talks are not public. No decision has been made, and adding the mRNA shot as another option in China’s general rollout is also being discussed, the people said.

“If you can explore different combinations, there frequently is a combination where you get a better outcome than just using the same vaccine twice in a row,” said Shane Crotty, a professor at the Center for Infectious Disease and Vaccine Research at California’s La Jolla Institute for Immunology. “I do think that’ll happen for Covid vaccines.”