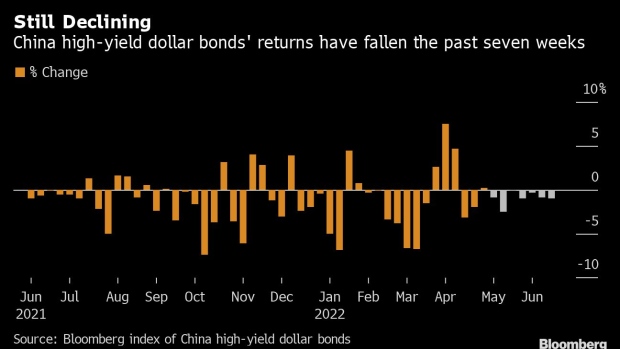 (Bloomberg) -- Chinese high-yield dollar bonds fell further Thursday, hit by the country’s largest developer being downgraded to junk territory in a sign of how far sentiment in the sector has fallen.

Noninvestment-grade dollar notes from Chinese issuers dropped as much as 2 cents on the dollar, according to credit traders, adding to what’s been another run of declines for the market. Prices haven’t risen on a daily basis in nearly three weeks, according to a Bloomberg index, approaching the streak set in March. Meanwhile, high-yield notes are on pace to post losses for an eighth-consecutive week, something not done since 2013.

Hitting the market Thursday was Moody’s Investors Service lowering Country Garden Holdings Co. from investment-grade territory. Its offshore notes dropped about 2 cents, erasing most of this week’s gains, according to data compiled by Bloomberg. Most have already been trading in stressed territory at below 60 cents, as the sector’s property sales have slumped and developers continue to default on offshore debt at a record pace.

Other builders were among the day’s bigger decliners, as well as casino operators in Macau. There, a Covid outbreak has shut many businesses and schools to pressure gaming firms’ bonds.

The worst-performing high-yield issuer this week has been Fosun International Ltd., whose early-week bond rout fueled fresh concerns about junk-rated issuers outside the property sector. Its notes rebounded for a second session Thursday to pare some of their recent steep losses.