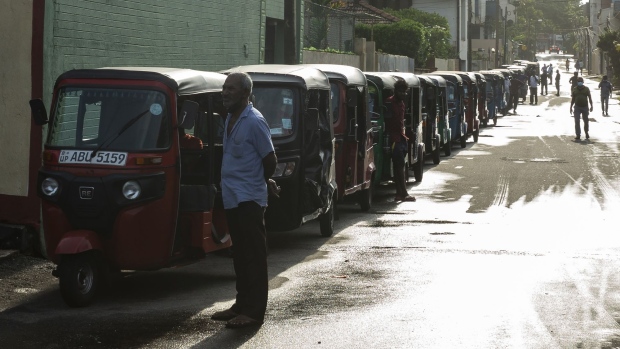 Three-wheelers line up for fuel at a gas station after a nationwide curfew was lifted for a few hours in Colombo, Sri Lanka, on Thursday, May 12, 2022. Sri Lankan President Gotabaya Rajapaksa has defied calls to resign, pledging instead to form a new government after violent clashes this week left eight people dead in an escalation of a monthslong crisis over food and fuel shortages. , Bloomberg

(Bloomberg) -- Sri Lanka is set to default on $12.6 billion of overseas bonds as its new prime minister struggles to stabilize an economy spiraling into chaos fueled by a lack of dollars and surging inflation.

The South Asian nation is set to blow through the grace period on $78 million of payments Wednesday, marking its first sovereign debt default since it gained independence from Britain in 1948. Its bonds already trade deep in distressed territory, with holders bracing for losses approaching 60 cents on the dollar. The government said last month it would halt payments on foreign debt.

Prime Minister Ranil Wickremesinghe, appointed last week, is yet to choose a finance minister, who will help lead talks with the International Monetary Fund over badly needed aid. He warned on Monday that the country was down to its last day of gasoline supplies, as it didn’t have the dollars to pay for shipments aboard tankers anchored just offshore. He also said it would need to print money to pay government salaries, a move that will worsen inflation already running near 30%.

The state-run Ceylon Petroleum Corporation has sufficient stocks of diesel at hand but there is a “severe” shortage of petrol, the company’s director-general of marketing Krishantha Wickramasinghe told reporters in Colombo.

He said the crisis could ease with the arrival of another shipment Wednesday.

Opposition leader Sajith Premadasa asked Sri Lankans overseas to send money home to their families using the formal banking channels as a way to support the country through its dollar shortfall.

Ruling party legislators also voted down an opposition proposal for a debate on Tuesday that was aimed at censuring the president for the plight of the nation. The opposition could manage only 68 supporting votes compared to 119 against it.

The main opposition party will continue to look at ending the “Rajapaksa rule,” which is the first step in rebuilding the country, its leader Sajith Premadasa said in a tweet.  The Samagi Jana Balawegaya party plans to not take up any cabinet positions.