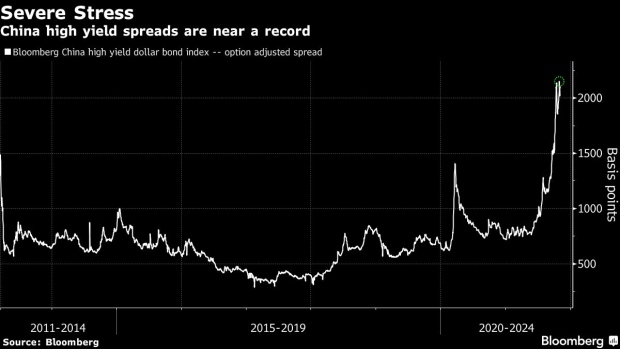 Unfinished buildings at China Evergrande Group's Health Valley development on the outskirts of Nanjing, China, on Friday, Oct. 22, 2021. China Evergrande Group pulled back from the brink of default by paying a bond coupon before Saturday’s deadline, giving the property giant at least another week to come to grips with a debt crisis that has rattled investor confidence in the world’s second-largest economy. , Bloomberg

(Bloomberg) -- A unit of China Evergrande Group faces a key deadline for a coupon payment Saturday, while smaller rival Kaisa Group Holdings Ltd. was halted in trading a day after missing payments on wealth management products.

Evergrande’s Scenery Journey Ltd. has $82.5 million in coupons coming due on two dollar bonds. Next Wednesday, the grace period expires for other bond-interest payments owed by the embattled property developer.

Kaisa shares and bonds tumbled Thursday after the company said it has faced “unprecedented pressure on its liquidity” due to unfavorable factors such as credit rating downgrades and a challenging property market environment. No reason was given for the suspension Friday.

Meanwhile, with Chinese authorities urging Evergrande’s billionaire founder Hui Ka Yan to use his own money to alleviate the company’s debt crisis, his personal balance sheet has attracted attention from bond investors.

Shares of Kaisa and several units were suspended from trading in Hong Kong on Friday morning, a day after the Chinese developer flagged liquidity pressure and said it missed payments on wealth products it guaranteed.

Kaisa became a focus of investor concern after it canceled meetings with investors in October, triggering doubts about its liquidity and sending its dollar bonds lower.

“We’re on the brink of a systemic series of defaults in China real estate” that could wipe out appetite among longer-term global investors, according to Dhiraj Bajaj, head of Asian credit at Lombard Odier.

In a sign of how severe China’s property bond rout has become, the nation’s most widely-owned junk debt is now worth $37 billion less than when first sold to investors.

The 320 notes included in a Bloomberg index of Chinese high yield dollar debt are valued at a combined $102.5 billion, versus their face value of $139 billion, according to data compiled by Bloomberg as of Nov. 3. Yango’s bonds are at the steepest discounts to where they were issued, with three notes trading at less than 13 cents. The index, predominantly made up of property firms, is down about 26% since May.

That valuation gap is likely to widen. With Chinese junk yields surging past 20%, refinancing upcoming maturities with new bonds has become too expensive. Regulatory limits on leverage mean highly indebted firms like Evergrande haven’t tapped the market in months. Fresh cash is hard to come by as slowing property sales drag on revenue, slumping shares reduce the value of listed assets and other disposals prove difficult to complete. Some developers even have dividends to pay.

With Chinese authorities urging Hui to use his own money to alleviate Evergrande’s market-roiling crisis, the property tycoon’s personal balance sheet has become a key variable for bond investors trying to game out how long the developer can stave off default.

Measuring Hui’s financial firepower isn’t easy, given that many of his assets are held through an intricate web of companies and affiliates that can obscure their ultimate owner.

Still, Hui’s luxury assets alone could help cover the more than $400 million in bond coupons that are yet to come due or have grace periods ending this year. The possessions –- valued at an estimated $485 million -- include a yacht, business jets and houses under Hui’s name or affiliates of the developer. Last month, Evergrande paid two bond coupons before the end of a grace period following the pledge of some shares and a mansion.

The divestment by China Evergrande New Energy Vehicle Group Ltd. was announced in a Thursday statement from Bedeo that confirmed an earlier Bloomberg News report.

The deal helps Europe-focused Bedeo, which supplies light commercial vehicles and technology for zero emissions transport, expand into Asia and the U.S. Financial terms were not disclosed.