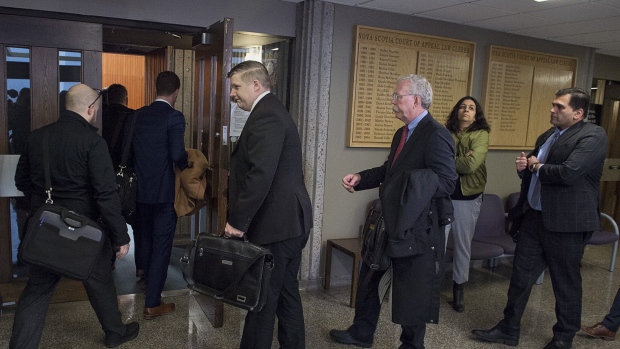 Interested parties attend Nova Scotia Supreme Court as Quadriga CX seeks creditor protection in the wake of the sudden death of its founder and chief executive in December and missing cryptocurrency worth roughly $190-million, in Halifax on Tuesday, Feb. 5, 2019. , THE CANADIAN PRESS/Andrew Vaughan

HALIFAX -- A judge has approved more than $1.1 million in fees for lawyers and the accounting firm probing the controversial demise of the QuadrigaCX cryptocurrency exchange.

Justice Darlene Jamieson agreed to Ernst and Young's bill for $778,444 in legal and other fees, saying the firm has been diligent as it investigated what she called the country's first insolvency proceeding involving cryptocurrency.

She said during the hearing Wednesday the case is challenging because auditors were unable to speak to its owner, Gerald Cotten, whose wife has said he died from complications linked to Crohn's disease while travelling in India last December.

"The monitor's work has been extensive in administering the ... proceeding and seeking to recover funds on behalf of Quadriga and its affected users," Jamieson said in a decision read in Nova Scotia Supreme Court.

"The monitor has faced complicating factors including the lack of books and records and the extensive use of third parties to store information."

A monitor's report filed before the Nova Scotia Supreme Court lists 18 outside experts hired by the accounting company to help with the audits.

Fees for legal teams representing an estimated 76,319 unsecured users of the cryptocurrency exchange -- who have come forward to claim more than $214 million in cash and cryptocurrency -- also were approved at Wednesday's hearing.

A court report says representative lawyers have been paid a total of just over $380,000, with about $340,000 going to lawyers with Miller Thomson in Toronto and the remainder to locally based counsel at Cox and Palmer.

The online exchange, which was once one of the largest in Canada, offered a platform for trading and storing digital assets like Bitcoin, Litecoin and Ethereum. It was founded by Cotten in 2013.

The industry is not regulated in Canada, nor does it have any industry oversight.

Ernst and Young has confirmed it has found only $32 million in cash, and it is trying to recover another $900,000 from a third-party payment processor. QuadrigaCX routinely turned to payment processors to handle transactions because traditional banks were leery of dealing with the company.

As for the missing cryptocurrency, Ernst and Young says it has taken possession of or identified digital assets worth about $1 million.

The accounting firm's reports have said the late founder created fake trades and transferred customer funds into his personal accounts, where the money was used for high-risk trading and to enrich his lifestyle.

The Nova Scotia Supreme Court has issued orders preventing Cotten's widow, Jennifer Robertson, from selling about $12 million in assets belonging to her or Cotten's estate.

The accounting firm's latest report says the financial reporting and operations of QuadrigaCX were flawed, mainly because Cotten directed the entire enterprise on his own from his home in Fall River, N.S.

As a result, Ernst and Young says the typical segregation of duties and internal controls didn't appear to exist, there were no accounting records and no separation between the company's funds and customer funds.

Wednesday's proceedings approving fees marked the official end of the process under the Company Creditors Arrangement Act, but proceedings will continue under the Bankruptcy and Insolvency Act.