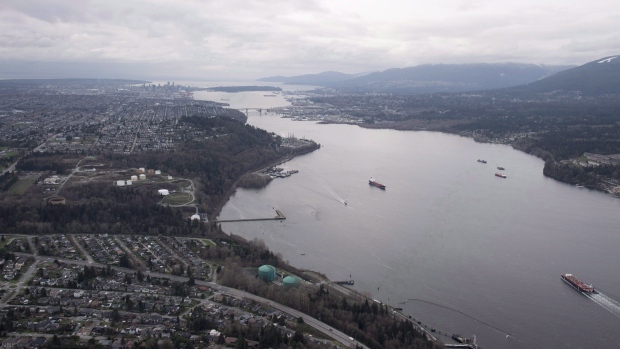 VANCOUVER -- The Federal Court of Appeal has set aside a government decision approving the expansion of Kinder Morgan's oil pipeline through the Coldwater Indian Band reserve south of Merritt, B.C.

In a split decision, the three-judge panel ruled the federal minister of aboriginal and northern affairs failed to assess the impacts of a pipeline easement on the Coldwater band. The ruling says the minister had a continuing duty to protect the band's interests on its reserve from an exploitive bargain.

Coldwater Band Chief Lee Spahan said Wednesday the band was celebrating the decision that also forces a review of the original pipeline agreement made 65 years ago.

The original Trans Mountain oil pipeline was constructed through the small reserve in 1952. The band, which has about 860 members, received a one-time payment of $1,292.

When Kinder Morgan (KMI.N) went back to the federal government to increase the capacity of the pipeline between B.C. and Alberta, the First Nation expressed its concern.

"They also expressed their desire that the minister take the opportunity afforded by the request for consent to the assignment to modernize the terms of the indenture so as to include more generous compensation for the band," the ruling says.

The band wrote a letter to the federal department saying it was not in its interest to consent to the pipeline expansion. In December 2014, the government consented to the doubling of the pipeline through the reserve.

The ruling stated the federal minister's decision to assess the current and ongoing impact of the pipeline easement, which includes plans by Kinder Morgan to expand its capacity on the original pipeline by 50,000 barrels a day, was unreasonable.

Coldwater's lawyer, Matthew Kirchner, said the ruling strongly clarifies the federal minister's duty to ensure the band's interest in its lands are protected.

"What should Coldwater be getting now for this easement?" he said. "How does the minister now protect Coldwater's interest in the land now and going forward?"

Spahan said the decision will help Coldwater fight to protect its land.

He said Coldwater is in court again Monday to oppose Kinder Morgan's plan to locate part of its second pipeline project over an aquifer that supplies community water.

"I feel very pleased and happy," said Spahan. "It's another step forward to letting the government know they have to deal with us now."

"I would return the matter to the responsible minister for redetermination," says the 41-page decision.

In a statement, the office of the minister of Crown-Indigenous relations and northern affairs said "the minister would welcome to meet the Coldwater leadership to find a path forward and work together to address these issues."

Kinder Morgan spokeswoman Ali Hounsell said in a statement that the court decision does not affect the daily operations of the Trans Mountain pipeline or the expansion project.