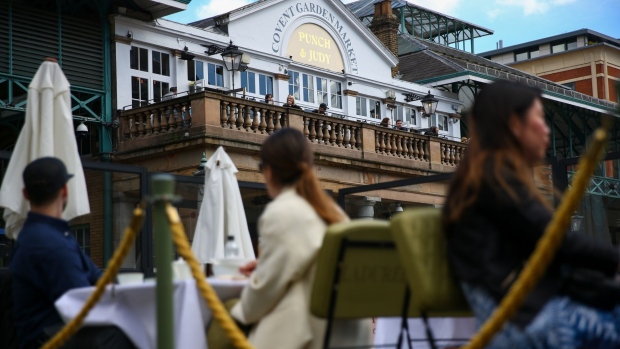 People dine outdoors at Covent Garden in London, U.K., on Tuesday, May 11, 2021. U.K. Prime Minister Boris Johnson confirmed that the next stage of lockdown easing in England will go ahead on May 17 as planned, as the Covid-19 infection rate reaches its lowest level since September. Photographer: Hollie Adams/Bloomberg , Bloomberg

(Bloomberg) -- The owner of most of London’s Covent Garden district has written down the value of its estate by 146.8 million pounds ($203 million) after the coronavirus starved the city’s tourist heartlands of visitors.

Capital & Counties Properties Plc’s holdings fell 5.1% to 1.8 billion pounds in the six months through June, according to an earnings statement Tuesday. That’s a slower pace of decline than the previous period as the U.K. government eases restrictions, allowing stores to re-open and increasing demand for space.

“The elevated level of enquiries, strong transactional activity and improving sentiment indicate that the worst of the pandemic may be behind us.” Chief Executive Officer Ian Hawksworth said in the statement.

Central London was emptied of the office workers and tourists that keep its stores and restaurants going, prompting many businesses to withhold rent during the peaks of the pandemic. That’s hit the value of real estate in even the most desirable districts as investors fret about when and if footfall will return to pre-Covid levels.