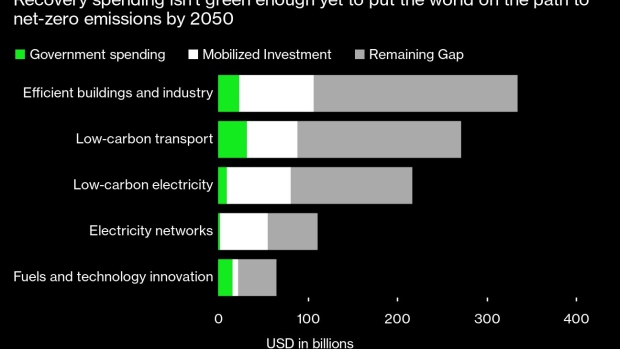 For all the lives lost and economic damage done by the coronavirus pandemic, it’s also managed to hurt efforts to combat climate change.

Corporate demand for clean electricity is declining for the first time because more employees are working from home than ever before. This is most notable for companies in the RE100, which have all pledged to offset 100% of their electricity consumption with clean energy.

Ninety-four of the 222 RE100 companies that have disclosed electricity demand data for both 2019 and 2020 reported drops in their consumption as they adjusted to remote work environments last year, said Kyle Harrison, a New York-based corporate energy strategist at Bloomberg New Energy Finance (BNEF).

“The RE100 still presents an incredible clean energy investment opportunity, but the long-term outlook has dampened slightly,” Harrison said.

While large energy users saw significant increases in their electricity consumption, such as QTS Realty Trust (29%), General Motors (28%), Schneider Electric (25%) and Vodafone (17%), this wasn’t enough to offset the declines from other companies, Harrison said. Notable companies that reported the largest decreases included AstraZeneca (13%), Signify (23%) and Siemens (36%).

For some, the slide in consumption may be a temporary setback, but for others, it may take years to recover as businesses turn to a full or hybrid remote work environment.

The 222 companies in the RE100 that set 100% clean energy goals will need to purchase an additional 247 terrawatts (TWh) of clean energy in 2030, BNEF estimates. That’s down from the previous 269TWh forecast from the research firm in January, and marks the first time the 2030 outlook has dropped.

The largest providers of clean electricity to corporations are Invenergy LLC, Ignis, Engie SA, NextEra Energy Inc. and Orsted A/S, according to BNEF. While the outlook for clean electricity remains bullish for now, the drop in electricity consumption from the private sector is something developers should keep an eye on, Harrison said.

The volume of corporate power purchase agreements did increase 86% in the first half of 2021 from the year-earlier period, as the world emerged from what had been the worst wave of the pandemic. “While corporate demand remains a healthy opportunity for clean energy developers, the Covid-19 pandemic may still rear its ugly head down the line,” he said.

Microsoft Corp. announced 35 new power purchase agreements last week for solar and wind to become the second-largest corporate buyer of clean energy globally. The deals underpin a broader strategy from Microsoft to have its hourly electricity consumption matched with clean energy at all times by 2030, Harrison said.

The S&P Global Clean Energy Index, which includes NextEra and Orsted, has advanced 177% since the start of 2019, and that includes this year’s decline of 21%.

Huge capacity-growth prospects for wind and solar-power developers and the ascent of ESG investing may keep “supporting premium valuations of the green sub-sector after the recent de-rating,” he said.