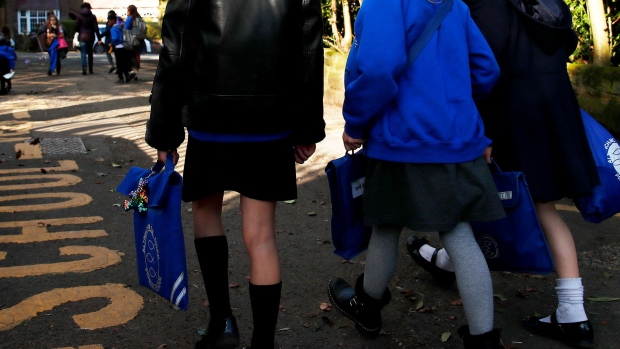 (Bloomberg) -- Coronavirus infections among school-aged children in England are “high and rising,” according to a major study that is likely to exacerbate concerns about the pace of the vaccine rollout.

Prevalence of Covid-19 is growing among those aged 17 and younger, the React-1 study led by Imperial College London found. The reproduction rate in that age group was 1.18, meaning that on average every 10 young people infected is passing it on to about 12 others. That has driven up the national infection rate, even though prevalence is falling in the 18-54 age group.

The U.K. began giving vaccines to 12- to 15 year-olds last month, but Boris Johnson’s government is under increasing pressure to explain why the take-up in England is so slow -- with teaching unions pointing to “logistical problems.”

Just over 12% had received a first dose in England as of Monday, according to official data, compared to more than 40% in Scotland where the rollout is focused on clinics rather than schools. Ministers had pledged to offer all eligible children a vaccination by the end of next week.

“Our latest data show that infections are high and rising in school-aged children,” Professor Paul Elliott, director of the React program from Imperial College, said in an emailed statement. “Households with children also had a higher prevalence of infection, suggesting that children may be passing on the virus to those that they live with.”

The latest Imperial College findings cover the period of September 9-27 and involved over 100,000 volunteers.

Health Secretary Sajid Javid said the study shows “how important it is for young people to get the jab to protect them from Covid-19.” It comes just days after he and Education Secretary Nadhim Zahawi wrote a joint letter to parents urging them to give consent.

About one in 15 secondary school-aged children in England had Covid in the week ending October 2, according to separate estimates from the Office for National Statistics last week.

Focusing the vaccine program for children in schools may be slowing the rollout, with the number of students and staff out sick or isolating creating major challenges. There has been “very varied delivery and take-up,” Geoff Barton, general secretary of the Association of School and College Leaders, said in an emailed statement.

Some schools faced “logistical problems, such as the vaccination teams having insufficient staff to deal with the number of students needing jabs, running out of vaccines, or even not turning up when they have arranged to,” he said.

The React study estimated that vaccine effectiveness against infection, for all participants and vaccines combined, was 62.8%.