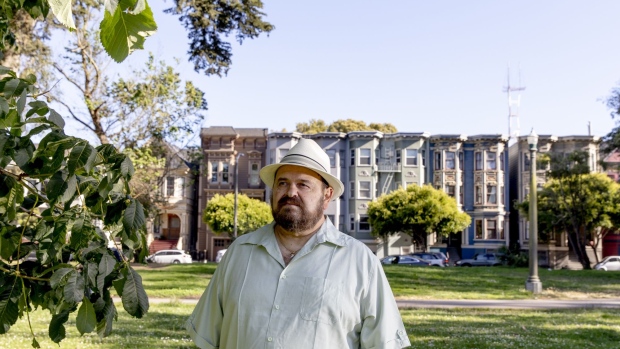 Pedestrians cross an empty California Street in San Francisco, California, U.S., on Tuesday, March 17, 2020. Six of the biggest counties in the San Francisco Bay Area ordered people to stay home except for essential needs, marking one of the nation's strongest local efforts yet to stem the spread of the coronavirus. Photographer: David Paul Morris/Bloomberg , Bloomberg

(Bloomberg) -- The coronavirus pandemic is exacerbating wealth and racial inequalities around the world. Nowhere is that more apparent than in San Francisco.

While many low-income employees in the service sector have been laid off or risk getting sick if they do go to work, the city’s high-paid tech workers have been mostly shielded. The engineers and product managers who helped push up the cost of living in the area over the last 15 years aren’t nearly as affected by the pandemic, with companies like Alphabet Inc. and Facebook Inc. giving them cash bonuses to upgrade their home offices and organizing virtual yoga sessions to help them stay fit.

Most tech employees aren’t worried about getting fired and the mostly-digital nature of software work means they can safely do their jobs from home. Many have even left the Bay Area completely.

At the same time, service industry workers like Joe Grandov, who has a part-time security job at San Francisco International Airport, are struggling.

Grandov, 65, says his hours have been cut by up to 20 a week since the pandemic began because he hasn’t been able to pick up overtime shifts. He also used to earn extra money driving for Lyft Inc. but said he had to stop because he was making as little as $35 a week, hardly enough to justify the health risks the gig posed. Business travel has come to a halt, which is hurting jobs like his that depend on a lively tech sector.

“It’s not been easy,” said Grandov, who is a member of the airport’s local union. “We’ve been selling things we don’t need because we need the money more.”

This divide between the tech and service industry is compounding the income disparities that have plagued the Bay Area for years. Since January, earnings among low-income workers in San Francisco County have fallen 52.1%, among the highest in the state, according to data from Opportunity Insights, a Harvard University research lab.

“The service sector already had stagnating wages, then you introduce a pandemic, and it becomes not just an income gap but a stark divide between those who will survive versus those who can’t,” said Russell Hancock, chief executive officer of Joint Venture Silicon Valley, a nonprofit that analyzes the region’s economy.

The effects of low-income job losses are already weighing on workers, according to Richard Garbarino, mayor of South San Francisco. While the city of about 68,000 hasn’t had major food insecurity issues in the past, it recently partnered with a food bank to distribute 750 meal boxes a week. The pandemic has hit low income families the hardest because they often rely on multiple part-time jobs, Garbarino said.

Over 55% of leisure and hospitality jobs were cut between May 2019 and May 2020 in San Francisco and San Mateo Counties, the most of any industry in the area, according to data from California’s Employment Development Department. Over the same period, professional and business services, which includes computer engineering and management, saw a 2% drop.

San Francisco’s economy may face even more challenges the longer tech employees stay home. Google and Facebook have told their staff to prepare to work remotely until 2021. Twitter Inc. says anyone who wants to can work from home forever.

“Restaurant and service workers are currently paid really well because they’re supported by big companies. When they take their work away, or those jobs away, that ripples through the rest of the economy,” said Jay Cheng, public policy director at the San Francisco Chamber of Commerce. If that happens, “San Francisco is no longer going to be able to be the golden child of the United States economy.”