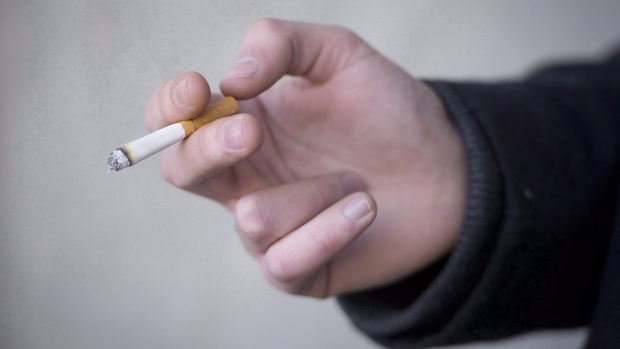 A smoker holds a cigarette outside a building in Vancouver, Monday, Jan. 20, 2014. , THE CANADIAN PRESS/Jonathan Hayward

Organized crime rings have set up illegal warehouses and factories across European countries such as Greece, Ireland and Belgium, to be closer to target markets like the U.K., Japan Tobacco executives said in a presentation at the Global Tobacco and Nicotine Forum this week. Decreases in consumers’ discretionary income may fuel demand for cheaper cigarettes, according to the maker of Winston and LD cigarettes.

“This is a direct result of the pandemic,” said Ian Monteith, head of Japan Tobacco’s global anti-illicit trade operations. “Criminals will try to exploit it.”

The global illicit tobacco market is worth between US$40 billion and US$50 billion annually, according to a World Bank report published last year. The counterfeit and contraband industry, if it were a company, would rank as the fourth-biggest maker of cigarettes, churning out 600 billion of them each year.

Lockdowns and border closures earlier this year disrupted the black market in tobacco, making it difficult to move counterfeit cigarettes from places where they’re made, like Belarus, via container transport. That has led smugglers to regroup, according to Japan Tobacco.

Counterfeit cigarettes may put consumers at additional health risks because they haven’t gone through quality control. About one in 10 cigarettes is bought illegally, and proceeds are funneled toward organized crime and terrorism, starving governments of tax revenue, Japan Tobacco said.

However, the number of production and storage sites that were dismantled by police in Europe dropped to 64 in the first half from 113 a year earlier, according to Europol. Lockdowns reduced the investigative capacity of law enforcement agencies, said Simone Pierre Di Meo, a specialist at Europol’s European Financial and Crime Centre in The Hague.

The cigarette industry often points to Malaysia as an example of how higher tobacco taxes can reduce revenue for governments. Malaysia’s illegal trade has jumped to 65 per cent of the market from about 35 per cent before a 2015 tax increase made legal cigarettes difficult to afford for many consumers, Japan Tobacco said.

Critics of Big Tobacco have said the industry is sometimes complicit in illicit trade of its own products. The Global Center for Good Governance in Tobacco Control said in April that reports of smuggling were used to justify a relaxation of sales restrictions during lockdowns.

Japan Tobacco said 96 per cent of all reported seizures of its products involved counterfeit cigarettes, and that its supply chain is well secured and maintained. The company sells Winston and Camel cigarettes outside the U.S.

Michael R. Bloomberg, founder and majority owner of Bloomberg News parent Bloomberg LP, has campaigned and given money in support of a U.S. ban on flavored e-cigarettes and tobacco.