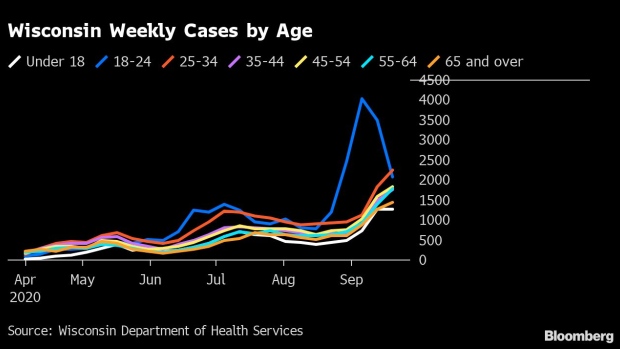 A bus travels along State Street in Madison, Wisconsin, U.S., on Wednesday, Sept. 23, 2020. A Wisconsin judge ruled that ballots mailed by Election Day in the crucial swing state can be counted until Nov. 9, handing another victory to Democrats who’ve sued across the U.S. to expand access to mail-in voting during the coronavirus pandemic. , Bloomberg

(Bloomberg) -- The Covid-19 surge sweeping Wisconsin started among people from 18 to 24 just as college opened for the academic year. Now, it’s reaching every corner of the population.

The state, where President Donald Trump has been planning campaign rallies Saturday, now finds itself with one of the highest per-capita case rates in the U.S. Experts say the return to college was among a dangerous confluence of factors that contributed.

Nationwide, Covid-19 cases have ebbed after the Sun Belt surge of July, and no state has seen the carnage that New York suffered at the start of the pandemic. But previously little-affected parts of the Midwest have become new hot spots, and parts of New York and Massachusetts are watching slight resurgences.

Across the country, the return to university campuses has been fiercely debated, and schools have had varying experiences with in-person instruction. But in Wisconsin, students returned to a state that had had low rates of the virus earlier in the pandemic and probably had less built-up immunity.

They moved from across the U.S. into dormitories and other group housing, their arrival coinciding with community-wide “pandemic fatigue,” which has hurt mask usage and social distancing, according to Laura Cassidy, an epidemiologist with the Medical College of Wisconsin.

“Universities can do everything they can, but students will be students,” Cassidy said.

University of Wisconsin System President Tommy Thompson said in a Thursday interview that the campuses were among the safest places in the state, with extensive testing, tracking and quarantine programs. But he acknowledged there was “some connection” between returning students and the viral wave.

“We have been a part of the problem at the beginning, not the total problem,” he said.

The Madison campus paused in-person classes shortly after the school year started, and is now undertaking a gradual restart after cases and positivity rates dropped dramatically.

But Thompson, a former Republican governor, said the campuses chose the best path for their more than 170,000 students. He said he was unaware of any student cases directly tied through contact tracing to outbreaks in the broader community.

“If we don’t educate them, they’re going to stay and party,” said Thompson, who served as secretary of Health and Human Services under President George W. Bush. “And what would you rather have?”

Patrick Remington, an epidemiologist and emeritus professor at the University of Wisconsin-Madison School of Medicine and Public Health, said cooler weather began driving people inside just as students arrived.

“That partisan debate plays out in communities where large groups of people have been seen gathering without the use of physical distancing and masks,” Remington said.

Governor Tony Evers, as well as the mayors of Green Bay and La Crosse -- all Democrats -- have asked Trump to reconsider his rallies there this weekend. While previous events have been marked by widespread disregard for mask guidance, a campaign spokeswoman said facial coverings would be available to all.

Elsewhere in the U.S.: