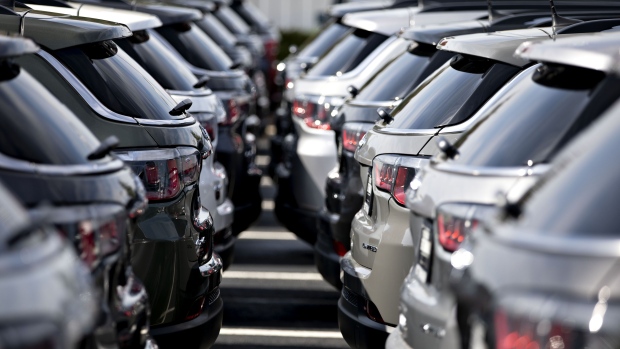 Even before the pandemic, Laura Ratliff hated car shopping. She was hunting for a well-worn, yet dependable, Toyota SUV, but the options didn’t much impress her. When she got to a certain point with a model or two, they failed inspections with her mechanic. It didn’t help that the dealers she met fit the stereotype—unctuous and inspiring zero trust. She peeked at some listings on Craigslist, too, but those sellers were sketchier still.

By May, as the Brooklyn, N.Y.-resident found herself in the epicenter of the virus outbreak in the U.S., she gave up the search. As a travel writer, Ratliff is often on the go, but for the time being, staying put seemed the best option. Her two dogs would be happy enough with their daily walks in Fort Greene Park rather than sprawling acres upstate.

Then she noticed a post on Instagram, from a fellow travel writer in Denver, touting new and used cars from Carvana Corp., an online-only car dealer. After about 20 minutes of web comparison-shopping, Ratliff bought a 2011 Volkswagen Tiguan with 85,000 miles on it. Within two weeks, Carvana shipped the wheels from Georgia to Philadelphia. She showed up in an Uber, plunked a palm-sized coin into the company’s massive vending machine, an elaborate marketing toy, and watched the SUV descend the glass-paneled parking garage like a 3,500-pound bag of Doritos.

“This is the first car I bought as an adult, and something about the Carvana experience made me feel more in control and safer, if that makes sense,” Ratliff explained. “Basically, I just looked at the odometer and drove off.”

The pandemic has accelerated consumers’ shift from analog to digital when it comes to car shopping. Auto factories ground to a halt this spring just as commuters closed their ride-hailing apps and abandoned public transportation. Used vehicles quickly became the only fully functioning auto market, yet millions of consumers were leery—even more so than usual—of going to a car dealership.

It was a set of remarkable, end-times conditions that Ernest Garcia III could not have imagined seven years ago when he started Carvana in a bid to digitally disrupt more than a century of four-wheel commerce. His business suddenly became one of the best-positioned car dealers in the country, along with a smattering of traditional dealers who quickly ramped up online sales in the weeks after the first waves of the pandemic. Demand boomed and heading into the summer, inventory across the industry was squeezed.

Thanks to the Covid economy, Carvana as well as rival startups Shift Technologies Inc. and Vroom Inc. are seeing growth rates their IPO bankers could only have dreamed of. The trio are focused almost exclusively on used vehicles, with no-haggle pricing and no-questions-asked return policies, but also compete with new-car salesmen, used-car lots and peer-to-peer platforms such as Craigslist and Facebook Inc.’s Marketplace.

“Things that were going to take five years to happen took place in five months,” said Shift Chief Executive Officer George Arison. His company is scheduled to start trading on the Nasdaq this morning.

In 2019 about one per cent of the 40 million used vehicles that changed hands in the U.S. were bought online. Carvana, Shift and Vroom collectively sold 125,411 vehicles at retail in the first half of 2020, a 36 per cent increase from the same period a year earlier. Meanwhile, sales of new cars cratered and used-vehicle sales at brick-and-mortar franchises declined 2.7 per cent, according to edmunds.com.

Carvana is selling about a quarter as many vehicles as CarMax Inc., the largest used-car dealer in America. Garcia said he sees a path to moving 10 times as many vehicles in the next few years. After hitting a low point in March, Carvana’s shares have risen almost sevenfold, spiking most recently when the company in late September updated its full-year forecast.

“The momentum of habit is what makes change occur at the rate that it does,” Garcia said. “There’s never been a period of time in my life when more habits were altered so drastically.”

In recent months, as lots have reopened for business, the pace of auto e-commerce has only increased, signaling a more fundamental change in the way Americans buy cars.

Decades ago, the growth strategy at Rick Case Automotive Group and other longtime dealers was all about the car. It won the right to open the first U.S. store for Acura, Hyundai and Mitsubishi, among others. The company would buy brand-new versions of competing vehicles so customers could compare.

“At the time, people couldn’t even say ‘Acura,’” said CEO Rita Case, who has succeeded her recently deceased husband at the helm of the business. “We’d just line them all up in front of the showroom and put the keys inside.”

These days, Case’s dealers combined sell about 113 machines a day and have fully digital transactions, virtual vehicle tours and Zoom sales calls. She oversees one of the industry’s most impressive ground games to attract prospective buyers into its 16 showrooms. There are on-site barbershops, free car washes and gas stations to fuel up at cost. When Broward County, Florida, turns out to vote next month, a few thousand people will stream into Rick Case Honda to cast their ballots.

“People used to go to four dealerships on average before buying a car,” Case said. “Now it’s 1.5, and the .5 is only because they’re not sure if they want a Honda or a Hyundai.”

Gone are the days when people needed to lay eyes on a car. With online videos and a cottage industry of semiprofessional car critics, it’s possible to get a really good look at a model via iPhone. Precision engineering and gains in manufacturing technology have made vehicles remarkably reliable—just scan J.D. Power’s annual reliability report for reassurance. And most sales, even used cars, are backstopped by gracious warranty programs.

For the skeptics, Shift still offers test drives. And Carvana and Vroom have seven-day return periods, as well as robust warranties. Carvana also offers a 100-day “worry-free” guarantee to repair any major problems.

While the momentum in the digital car market is not particularly mysterious, it did require a catalyst. The new platforms for selling vehicles were designed to improve what is widely seen as a painful process. But in mid to late March, so-called frictionless transactions went from ideal to imperative. Almost 40 per cent of car buyers now prefer to purchase online, up from 19 per cent pre-pandemic, according to CarGurus, a digital platform for vehicle listings.

Car shops don’t make the majority of their money on an inflated window sticker. Rather, it’s an array of more subtle upcharges and fees, from warranty plans to finance referrals. The average U.S. dealership sells about 37 vehicles per week, according to the North American Dealers Association. On a new car or truck they make a gross profit of about $2,010. About a quarter of a dealer’s profit comes from new cars, while slightly more comes from used cars. The rest—roughly half—comes from fees tied to service, parts, warranties and financing.

“The traditional used-car dealership offers an inferior service,” said Vroom CEO Paul Hennessy. “Covid hasn’t made our business successful, it has made it more successful.”

For years, customers gave traditional dealers a pass on their clunky sales machines, because that’s the way the industry always worked, said Jim Lyski, chief marketing officer at CarMax. Now, no-haggle pricing and digital paperwork are quickly becoming a necessity. “You’re either going to meet the consumer’s expectation or you’ll find yourself in jeopardy,” he said—pandemic or no pandemic.

This slanted playing field and the stigma it’s created has captured analysts’ interest.  The new crop of digital dealerships could collectively sell three million vehicles a year, or about 8% of the U.S. used-vehicle market, according to Wedbush analyst Seth Basham. “Look at any consumer survey—people rate buying a car at a traditional dealership right up there with visiting the dentist,” Basham said. “With these digital players, it’s almost a virtuous cycle: They get momentum, people have a good experience and then they tell their friends.”

In the pandemic, however, brick-and-mortar dealers quickly converted to digital aspirants. Some 55 per cent of dealers now offer financing online, up from 36 per cent pre-pandemic, according to CarGurus. It’s difficult to find a car listing online that doesn’t promise a digital transaction, even if many of them are glorified lead generators for salesmen with empty showrooms.

Building a software platform for digital transactions takes time and money that the bulk of the 17,000 new dealers in the U.S. can’t afford. Most are small- to medium-size businesses at best. Rather than referring prospects to a web store, many dealerships are making house calls, bringing potential purchases to one’s driveway. Others are turning to third-party vendors like Digital Motors, a software startup that essentially builds customized internet stores. The company originally planned to start operating in July but was pressed into service four months early from desperate dealer clients.

Hennessy, formerly CEO of Priceline.com, likens auto e-commerce to the online travel market circa 1999. “We’re in the first pitch of the first inning,” he said. “Our competitors are going online and saying, ‘We should have a website.’”

Larger dealers were better prepared. AutoNation Inc. and Penske Automotive Group, the No. 1 and 2 sellers in the U.S., respectively, had tech platforms in place that could handle parts of a transaction, locking in a “guaranteed price,” for instance, or scheduling a test drive. Still, at AutoNation fewer than 10 per cent of customers are opting for home delivery or curbside pickup. “The overriding theme we’re hearing from customers is their demand for personal mobility … is trumping any concern they may have about leaving the house or not leaving the house,” CEO Michael Jackson said in a July 23 conference call.

In the second quarter, Penske reported a 40 per cent increase from the first quarter of 2019 in customers buying online, but that group accounted for less than five per cent of its transactions. “We’ll continue to see that number escalate,” said Anthony Pordon, executive vice president for investor relations. “But it’s the second-biggest purchase of anybody’s lifetime, so they still want to see that vehicle.”

Ultimately, the e-commerce economics may be too good to ignore. Dealers that figure out digital sales—and how to seamlessly add on fees and services—will save on staff and administration. Mike Ramsey, an analyst at Gartner, expects traditional dealerships will soon skip the sales office altogether. In the next few years, he reckons, one in five vehicles will be purchased online. “It will be like Amazon,” Ramsey said. “All of a sudden, everybody will be like, ‘Oh, we should have done this.’”

Vroom predicts that by 2030, half of all vehicles will be bought online.

Penske is hedging its bets. In 2017 it spent an undisclosed amount to acquire CarSense, a chain of five Pennsylvania stores and a web platform that’s a proxy for digital-only rivals. Of the shoppers visiting Penske’s digital sales channels, 15% to 30% end up buying a vehicle, according to Pordon, triple the close rate at the company’s stores.

In December, a few days before China’s first coronavirus headlines, AutoNation bought a US$50 million stake in Vroom.

“They could easily have put that US$50 million into their own business and chased it,” Vroom CEO Hennessy said. “I suspect many dealerships will be able to drop a car off at someone’s home. I don’t think many will be able to be great e-commerce companies.”