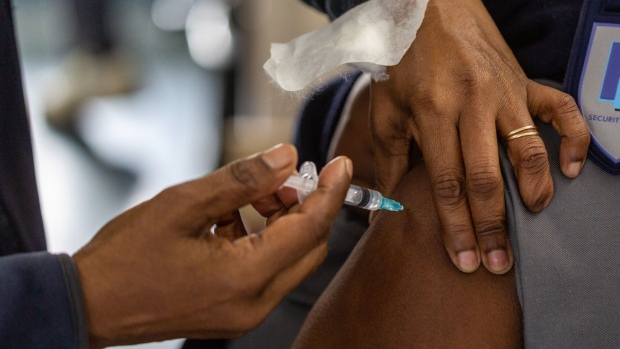 A health worker administers a dose of the Johnson & Johnson Covid-19 vaccine to a resident onboard a pop-up vaccination bus in Cape Town, South Africa, on Thursday, Aug. 26, 2021. South Africa is the worst hit nation in Africa by the coronavirus, having reported over 78,000 deaths and 2.6 million infections. Photographer: Dwayne Senior/Bloomberg , Bloomberg

(Bloomberg) -- People who got Covid-19 vaccine boosters after the shots were cleared for people with weakened immune systems had mostly mild to moderate reactions, according to the U.S. Centers for Disease Control and Prevention.

Some 22,191 booster recipients registered with a federal monitoring system starting Aug. 12, when the doses were first authorized on an emergency basis by U.S. regulators, to Sept. 19, the CDC said in a report on Tuesday. The data were reported by the shot recipients 0 to 7 days after getting the third dose.

Most of the reported reactions were mild, with 71% of respondents saying they had pain at the injection site, 56% reporting fatigue and 43% reporting a headache. About 1.8% said that they sought medical care, while 13 said they had been hospitalized. Specific reasons for receiving care weren’t reported in the survey.

“The frequency and type of side effects were similar to those seen after the second vaccine doses, and were mostly mild or moderate, and short-lived,” CDC Director Rochelle Walensky said at a briefing by the White House Coronavirus Task Force on Tuesday.

Nearly all respondents said they received an additional dose of the vaccine they initially got, with 98.6% identifying as Moderna Inc. recipients and 98.2% saying they first got the Pfizer Inc.-BioNTech SE vaccine.

A Pfizer-BioNTech vaccine booster was cleared for people 65 and older and other at-risk groups last week by the U.S. Food and Drug Administration. Moderna hasn’t yet received such an authorization.

The patterns of adverse reactions after the third dose for both the Moderna and Pfizer-BioNTech shots were consistent with previously described reactions after getting the second dose. However, there weren’t enough data to determine whether there were any patterns for people who received a booster from a different manufacturer.

The findings are limited to people who self-reported. A majority identified themselves as White and non-Hispanic.

Overall, approximately 2.21 million people in the U.S. had received additional vaccine doses as of Sept. 19, according to the CDC.