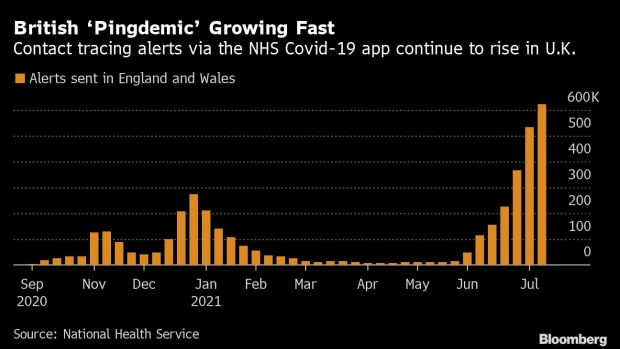 (Bloomberg) -- British food producers, retailers and pub chains are sounding the alarm after a surge in coronavirus cases removed employees from the workforce as people comply with rules on isolation.

Supermarket chain Iceland is aiming to hire 2,000 temporary workers to mitigate others being told to stay at home because of coming into contact with an infected person. Nestle SA, the maker of Kit-Kats, said it’s adjusting production planning. Mondelez International Inc., the owner of Cadbury chocolate, is resorting to overtime and agency staff, a spokesman said.

Fruit, vegetable and meat producers say the absences are putting even more strain on a workforce that’s already suffering shortages from Brexit. This month, 22% of all employee absences across the economy were due to positive cases or the need to isolate because of contact with one, according to data from wellbeing and productivity company FirstCare.

The disruption to supply chains, with images of empty supermarket shelves in U.K. newspapers, echoes some of the chaos going into the first peak of the pandemic last year. Yet this time it comes as Prime Minister Boris Johnson opens up the economy after lifting restrictions on July 19 with his vow to restore the country to normality and live with the virus. The government is monitoring the shortages and urged people not to panic.

Mitchells & Butlers Plc, which runs around 1,700 pubs and restaurants in the U.K., has seen dozens of its sites affected by the surge in self-isolation requests. That will only get worse after the government ended the mandatory wearing of face masks in England, it warned.

“If you lose one member of staff, the whole establishment can become unmanageable,” a company spokesman said. “We regularly have pubs that are having to close for two or three days and then reopen. If the chef gets pinged, we cannot run the kitchen.”

Bigger problems lie ahead, as restaurants may be unable to order in enough food and drink due to workers at suppliers being told to isolate.

British Growers, which represents the fruit and vegetable industry, said there are issues around logistics and fulfilling supermarket slots has been tough. “Everything has just conspired to make life a lot more difficult,” said Jack Ward, head of the industry group.

The government said it’s considering changing rules for some industries. But the current message remains, that people should continue to comply with the guidelines on isolation as cases spike following the lifting of lockdown restrictions this week in England.

Kwasi Kwarteng, the secretary of state for business, said he was “concerned” about the media images of empty shelves in supermarkets, and the government on Thursday will publish guidance on the sectors eligible for “critical worker” status. That contrasted with the position on Tuesday when Johnson’s office said it would not be producing a list covering individual industries. Instead, businesses would have to apply for exemptions.

“It is challenging, but the last 18 months have been challenging,” he told BBC Radio. “There have been huge pressures on business.” Doubly vaccinated people in England will no longer need to isolate from Aug. 16, as per the government’s roadmap. That change will be “enormous,” Kwarteng said.

But that’s still more than three weeks away. Two-third of companies in a survey by Make UK wanted the date to be brought forward, the manufacturing organization said on Thursday.

Businesses from stores to car factories began reporting more significant disruption last week after hundreds of thousands of people were contacted -- or “pinged” -- by the country’s coronavirus app. The rules say recipients are advised to self-isolate for up to 10 days.

The latest figures from the National Heath Service show 608,000 people were notified last week, up from 356,000 two weeks before.

Compliance -- which the U.K.’s statistical office recently put at about 90% -- isn’t a legal requirement, though. Some firms are taking a different approach to keep more employees in the workplace.

At food supplier Bidfood, which has about 5,000 workers across the U.K., staff who are notified by the app then take a PCR test and carry on working if it comes back negative, Chief Executive Officer Andrew Selley said.

“We think that’s appropriate and safe,” said Selley. “The ping is advisory. We operate in Covid-safe workplaces and we’re absolutely key workers in terms of the supply chain to hospitals, care homes, prisons.”

Britain’s largest supermarkets say they are having to reconfigure some shifts, but it is still nowhere near the levels they faced at the start of the pandemic when thousands of employees were shielding.

Wm Morrison Supermarkets Plc had to recruit 68,000 staff last year to help manage rising absenteeism during the first peak of the Covid-19 pandemic.

They also say some localized shortages of products are more down to the warm summer weather than the coronavirus because of higher demand for bottled water, ice-cream and fresh produce. More people are also staying in the U.K. instead of heading abroad for vacation.

But it’s all come on top of a dearth of staff in some key areas of the economy because of the pandemic and the U.K.’s departure from the European Union’s borderless labor market.

BP Plc said its supply chain has been impacted primarily by the industry-wide driver shortages across the U.K. The situation was exacerbated last week by the closure for a number of days of a fuel distribution terminal due to Covid-19 isolations, the company said in a statement. The terminal is now operating as normal.

At some meat processors vacancies were as high as 16% even before absences because of Covid, according to Nick Allen, CEO of the industry’s association.

“We’re sort of seeing the perfect storm with Brexit starting the process of the labor shortages, and then Covid accelerating it,” said Mark Gorton, managing director at Traditional Norfolk Poultry. “It’s putting a huge amount of pressure on everybody. It’s a very serious situation we’re in.”